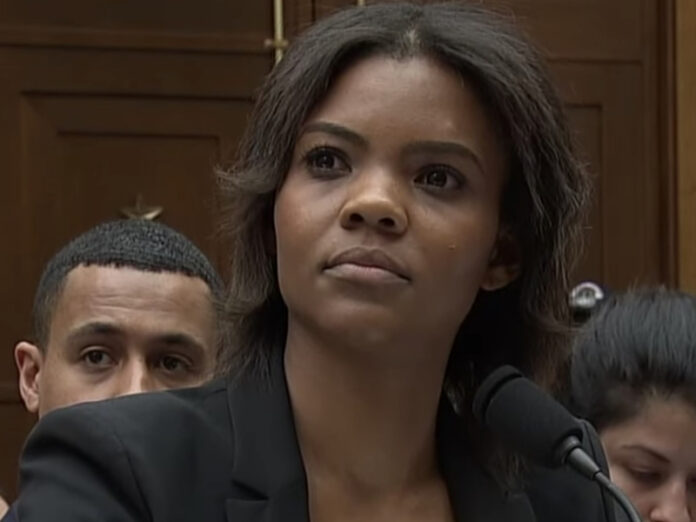 Just who is Candace Owens?

A denier of racism, a Black sellout? Check!

Candace Owens has catapulted herself into the spotlight as a mouthpiece for extremist and racist right-wingers. Since lurching to the right, the 30-year-old African American provocateur, who first ran an anti-Trump website that made fun of Donald Trump’s genitals, has made it her business to spout her twisted right-wing views at every opportune moment.

It is evident that the woman whom Trump has praised as someone who “represents an ever-expanding group of very smart thinkers” would want to maintain white supremacy and create disunion amongst her own people. Even politically confused rapper, Kanye West, praised Candace on his Twitter site and the move publicly kicked her up several notches when he tweeted, “I love the way Candace Owens thinks.”

At our age, we’ve seen more than our fair share of Black folks who have convinced themselves that caucasian brown-nosing is not cooning. Well, here we go again!

With respect to police violence and their abuse of authority involving the Black community, Candace fails to understand how there is an enduring concern among us to ensure police accountability for their actions. This is a real issue in the African-American community.

The deaths of several Black men and women, including Eric Garner, Michael Brown, Sandra Bland, Freddie Gray, Alton Sterling, and Philando Castile, drew national attention to issues of race and policing and spurred on demands for police reform. Candace has accused the left of launching a war on the men in blue to secure the Black vote in 2016. But that year, Candace also said, “as a Black man, you had a higher chance of being struck by lightning than being shot unarmed by police officers.”

The odds of becoming a lightning casualty in the United States in any one year is 1 in 700,000! Here’s a wake-up stat for you Candace–despite being 12.6 percent of the U.S. population, Black people were 26.7 percent of the people killed by police where their race was known. The number of Black people killed by police in the last year (215) was more than all the police who died in the line of duty (148), U.S. servicemen killed in action (2), and Americans killed by Islamic terrorists (0) combined.

As a frequent contributor to the Fox News Network, Candace is celebrated by fellow right-wing infotainers like the ever-racist and sexist Laura Ingraham and Trump loyalist Sean Hannity. The fast-talker uses the news outlet to blur facts and opinions relentlessly.

Candace grew up in Stamford, Connecticut in a low-income housing tower on the fringe of its downtown. She is the third of four siblings. During Candace’s senior year in high school, four white boys left voicemails saying they would put a bullet in the back of her head if they found her home and threatened to tar and feather her family, and all because she was Black. The story quickly attracted media attention because one of the boys was the son of the then-Stamford mayor (and later Connecticut governor) Dannel P. Malloy. The NAACP got involved in the racial hate crime. Candace left school for six weeks to wait out the firestorm. The Owens family sued the Stamford Board of Education for failing to protect Candace and won a settlement for $37,500.

After high school, Candace studied journalism at the University of Rhode Island but dropped out in her junior year because she said her loan was declined. She went on to educate herself by reading works by Ann Coulter, Milo Yiannopoulos, Ben Carson and Thomas Sowell.

A Push Towards a Racist Agenda

She recently resigned as the communications director of Turning Point USA, a right-wing non-profit that promotes itself as a grassroots response to a perceived “liberal intolerance” on college campuses, but that has come under fire for racism and alleged illegal campaign activity following a New Yorker magazine exposé.

After the comment about the mass murderous Nazi leader Adolf Hitler was made, some Turning Point campus chapters and outsiders as well too to social media and phone calls to the organization’s administrative office demanding that Candace resign.

Tariq Nasheed, a film producer, author and media personality, tweeted his thoughts that summed up his views on the incident surrounding Candace’s Hitler comments: “The suspected white supremacist organization Turning Point USA got Candace Owens to make Hitler comments FOR THEM. This way, they could hide their racism behind a Black person, who they basically used as a crash dummy to push their racist agenda.”

Why is it not shocking that Candace is engaged to a white Brit, George Farmer, who just happens to be the chairman of Turning Point UK?

According to the Pew Research Center, only 8% of Black voters identify as Republican or lean toward the party. Candace launched the movement Blexit beginning this year to free African-Americans, Latinos and other people of color from the grip of the Democratic party. She is keeping hope alive that there will be a colossal “Black exit” from the left. The campaign made headlines after it was revealed Kanye West helped her design the Blexit logo. The term Blexit is a take on Brexit, the withdrawal of the United Kingdom from the European Union.

It appears Candace allegedly stole the term Blexit from a movement to encourage African-Americans to leave white financial institutions and bank Black. The original Brexit was launched in 2016 and led by Minnesota-based Me’Lea Connelly who has threatened Candace with legal action if she continues to use the term.

Candace’s hateful rhetoric and unfortunate popularity are expanding. If you can stomach Candace, she can be viewed on her YouTube channel trying to gin up young conservatives, and cutting in, and cutting down interlocutors; the episodes have unfortunately topped over 9 million views. She has also amassed over 1 million followers on Twitter. Sad!

Last year, 50BOLD.com did NOT invite Omarosa Manigault Newman to the sisterfriends gathering. Since then, Omarosa has come to her senses by denunciating her former boss, Trump. Omarosa was comatose, and now she’s woke.

As far as Candace Owens, she is not even a cookout consideration. She probably wouldn’t want an invite anyway because there would be too many of us!

Here are a few more views from the warped mind and twisted heart of Candace Owens:

Black Americans were “doing better under the Trump presidency” and that it’s a “tremendous time to be alive as a Black American.” She has also referred to Trump as a “savior.”

Thinks the Me Too Movement is stupid and hates it

Claims racism no longer exists because she is not a slave

Is sure Congresswoman Maxine Waters has a low IQ

The following statement also came out of Candace’s mouth…