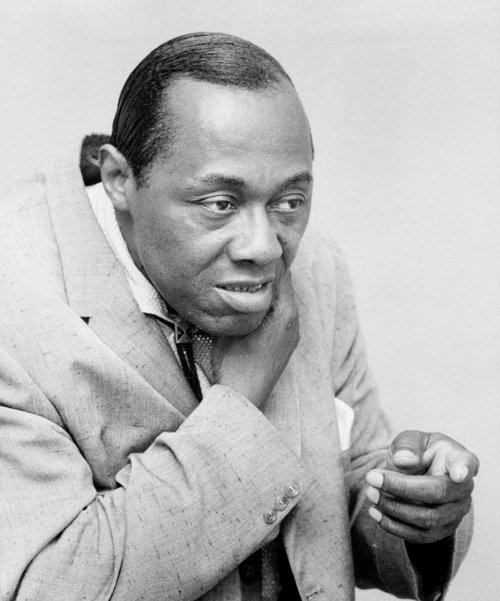 There are very few people under the age of fifty who will recognize the name Stepin Fetchit. The actor, who starred in countless films and stage productions, reminds us of a time when we were viewed as groveling menials and many blame Fetchit’s absentminded, coonish, and shiftless screen portrayals for this generalization. The actor’s buffoonish antics, the mortifying manner in which he shucked and jived his way into this country’s consciousness, and how he in no way advanced, the intellectual and artistic standing of Black Americans, still makes many of us cringe at the mere mention of Fetchit’s name. Yet, despite his public persona Fetchit was far from stupid, in fact, he was a smart, well-spoken man, who was the first Black entertainer to become a millionaire. He was also the first Black actor to receive featured billing in white films. In fact, the performer felt he opened doors for other African Americans to step into the film industry.

Fetchit was born on May 30, 1902, in Key West, Florida. Lincoln Theodore Monroe Andrew Perry was the birth name given to him by his West Indian parents to honor statesmen and past presidents. At age 14, Fetchit ran away from home, traveling throughout the south with plantation shows where Black performers put on stage shows for Black farm workers. Soon Fetchit made his way onto the minstrel, carnival, and medicine shows circuit. The screen name that later became his trademark came about when he bet on a horse named Stepin Fetchit in Oklahoma and won $30. He wrote and sang a tune about the horse and a Georgia theater manager heard it, liked it and gave him the name.

Soon Fetchit made his way to Hollywood where he pursued a career in film. He made his film debut in 1925 in The Mysterious Stranger and by the time the mid 30’s rolled around, he was a big film star. Appearing in 44 films between 1925 and 1939, Fetchit was the first Black actor to earn millions of dollars and receive screen credit for appearing in white films. In all of his movie roles, Fetchit, who considered himself a comedian, basically provided his viewing audience with the same coon-show antics in all of his films–quintessentially aimless, inept, with his mouth agape, lips quivering, eyes drooping, shoulders slouched, arms dangling and all accompanied by whiny speech that could barely be understood.

In defense of his deliberate characterization of a subservient Black man, Fetchit once said during an interview with a newspaper, “I decided to go ahead pantomiming just as I had always done. I picked out the important words in the lines I had, the ones important for laughs, or that gave a cue to other actors; I consciously stress them, the rest of the speech doesn’t matter. I mumble through the rest, gestures helping to point the situation.”

Apparently, Hollywood was enamored with Fetchit’s screen persona and according to producer Hal Roach of The Little Rascals fame, Fetchit was hilarious. Roach was once quoted as saying, “Stepin Fetchit was a very funny guy. That’s why we tried to use him because he was a skilled comic.”

Fetchit briefly took a hiatus from film acting in 1940 because he was frustrated by his futile attempts to gain equal pay in racist Hollywood. He did return to acting from the mid-forties to the early fifties for financial reasons, appearing in only eight more films.

In his personal life, Fetchit married three times and was known for having a strong attraction to teenage girls, a predilection that led to his being arrested in 1942 for having an illicit liaison with a then 16-year-old girl.  Fetchit spent money as quickly as he earned it, large homes with Asian servants, fancy cars, surrounded by beautiful models galore but by 1947 his film career was coming to a close and he was forced to file bankruptcy. Taking a plunge to work on the other side of the camera, Fetchit formed a production company to film the lives of Black athletes like Jack Johnson and Satchel Paige but the company went bust. The highly literate Renaissance man even had a career as a writer for the Black newspaper, The Chicago Defender. But soon after, Fetchit found himself on the road again telling jokes and singing.

With the rising crop of dignified African American Hollywood talents such as Sidney Poitier, Dorothy Dandridge and Harry Belafonte, Fetchit’s screen portrayals were criticized more and more. Many in the community felt embarrassed by his past performances. Fetchit soon faded into black and did not resurface until the 1960’s when it was discovered, he had been a charity patient at a Chicago hospital where he underwent prostate surgery. Sadly, in 1969, Fetchit’s 31-year-old son went on a shooting spree killing three people including his own wife and injuring 17 men and women in a highway incident before turning the gun on himself. It was said that Fetchit, who had been estranged from his son, was deeply affected by the violent incident.

Becoming a Muslim in his later years, Fetchit took on one last minor role in the 1974 film, Amazing Grace. Three years later, Fetchit entered a motion picture retirement home in California after suffering a stroke. In 1985, the comedian passed away of heart failure and pneumonia, he was 93.

The Fetchit legacy has not been one of admiration. He is viewed by many in the community even to this day, as a black stain in the context of historical Black Hollywood. There are, however, film historians who do not paint a picture of Fetchit as a persona non grata. Instead, he is recognized as an artist and his art consisted of mocking and caricaturing the white man’s vision of Blacks. They believe he was one of the few Blacks to achieve some measure of status in American films and he deserves respect. Fetchit once said of his film portrayals, “Just because Charlie Chaplin played a tramp doesn’t make tramps out of all Englishmen, and because Dean Martin drinks, that doesn’t make drunks out of all Italians,” he said in a 1968 interview with The Times. “I was only playing a character, and that character did a lot of good.”