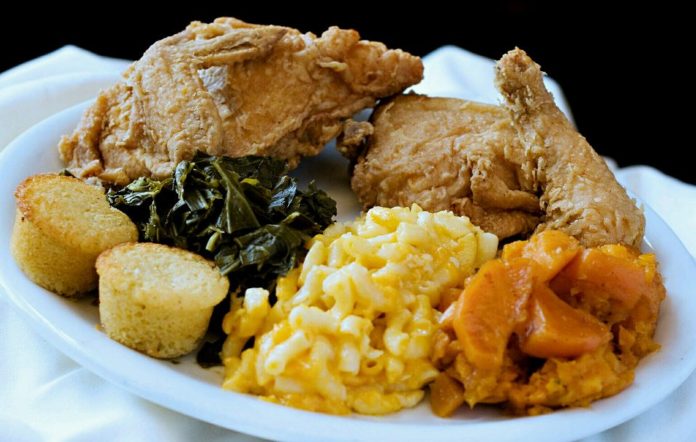 Soul Food is treasured, soul-satisfying, and an integral part of African-American culture. These are the foods that make us salivate–fried fish, yams, ham hocks, mac and cheese, potato salad, fried chicken, and gravy…yes lots of gravy!   Finger-Lickin’, lip-smacking, soul food provides comfort and makes us feel all warm and fuzzy inside. Soul food meals take center stage when we gather with family, friends, and after church during fellowship. These scrumptious morsels take us home. Yet, in the face of such staggering statistics as diabetes, high blood pressure, and certain types of cancer that run rampant in the African American community can these foods really feed our souls if they’re killing our bodies?

Slavery required us to make silk purses from sows’ ears. We are ingenuity itself. We breaded and fried to make 10 servings from 4. We salted meat to avoid spoilage, and that salt allowed us to retain water in our bodies, while we toiled under the hot sun. We managed. And in food, we found moments of reprieve. 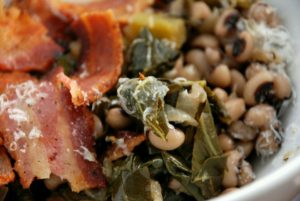 Progress moved many of us out of the fields and into the boardrooms. The industrial revolution gave us ready access to more processed foods. Without the physical activity to burn the fat, sugar, and salt in our foods, what were once victuals of survival became agents of pain, contributing to a shorter lifespan than our white counterparts, and one fraught with health challenges.

Notwithstanding the close connection between food and history, we must stop kidding ourselves: we may be passing down the traditions of a favorite aunt to our children, but we are also sharing her tendency toward diabetes. In the past, any efforts to get us to eat other types of healthier foods have been met with resistance and was viewed as trying to eradicate Black culture. Well, it’s time to harken back to our real traditions around food. It is definitely possible to eat the foods associated with soul food in a healthier way, as our grandparents and grandparents before them did, so that we can overcome our high rates of certain illnesses. 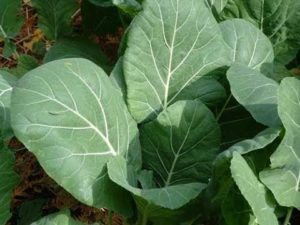 Go green. A survey done by the U.S. Department of Agriculture (USDA) found that 88 percent of African-Americans ate no dark green leafy vegetable. Well, enter collard greens the original superfood. Containing vitamins B1, B5, B6, iron, vitamin E, copper, protein, magnesium, phosphorus, folate, omega-3, niacin, and fiber, they are a conduit to good health and a connection to our past. Slow cooking them in saturated fats like pork adds to their calorie count and depletes them of their nutritive value. Instead, cut out the center vein, and steam them tender, while sautéing the leaves in olive oil or a small amount of vegetable broth. Instead of adding calorie–ladened smoked ham hocks to the greens, try sprinkling chipotle powder that not only adds heat but a smoky flavor.

Regain your (extra) Virginity. The USDA study also reported that African Americans get about 35 percent of their calories from fat and 12 percent from saturated fat. Nutritionists recommend that 30 percent or less of calories be from fat and less than 10 percent from saturated fat. Get rid of the lard and butter, opt for flavoring foods with extra virgin olive oil (EVOO) instead. According to the FDA, adding 2 tablespoons a day to your diet may reduce the risk of coronary heart disease, which African-Americans are at greater risk of than their white counterparts. Serve it alongside bread. Whisk it with white balsamic vinegar, thyme and tarragon, honey, and some mustard to replace mayonnaise in a potato salad (and leave on those potato skins).

Get raw. Raw vegetables generally retain their nutrition better than cooked ones. They also take up greater volume in our stomachs so we tend to eat less of the foods that follow. Our grandparents understood the nutrition in raw foods, even though salad was not an option: they pickled. Dig out gran’s old picking recipe and experiment with okra, turnips, carrots, and asparagus. Placing them at the poker table instead of artificially-flavored, high-fat snacks is far more in keeping with what our grandparents taught us. And the probiotics in pickled foods keep our guts healthier than the chemicals contained in store-bought cured meats. 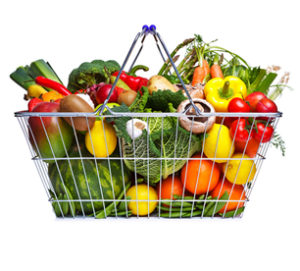 Don’t drink to that! In many families, it’s not a party until someone brings out the unhealthy substitutes for water–Kool-Aid and grape sodas. Yet, a single 12-ounce can of grape soda contains 48 grams of sugar. Kool-Aid is nothing but a massive dose of sugar, which we know causes an increase in inflammation and insulin.

Drink sparkling water. Add fresh lime or berries, for a hint of natural flavor. If you must have more flavor, make ice cubes with whole fruit puree and let them melt into the water. An added benefit: switching out soda saves hundreds of dollars a year and gets us all closer to that recommended half gallon a day of water, which contributes to weight loss and longevity. 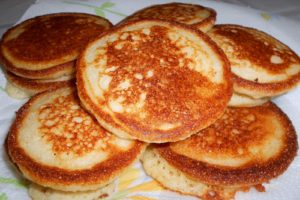 Bring back the hoecake. A recent New York Times article discussed tracing heirloom “hill rice” to African survival reminds us of the importance of grains to our overall health. The sugary, processed, cornbread most of us eat today bears no resemblance to the breads of our ancestors. Our families’ griddle, corn, and hoecakes were made with hearty grains, no sugar, and provided us with necessary nutrients. The resurgence of eating closer to the source has now made important grain staples like buckwheat, freekeh, quinoa, and sorghum available at many grocery stores. Buy them.

Banish bleached flour from the pantry. Most recipes can be adapted easily to include whole grain flours. Heirloom grains, such as farro paired with meat, black-eyed peas, or red beans (instead of potatoes or white rice) will markedly increase the nutritive value of a meal.

People of color have a long and wonderful history to pass to our families. Soul Food is part of that history. We can choose foods that feed our souls and our bodies. We can choose to make health and wellness part of our food culture, our history, and our family tradition; a gift our children can pass down forever. Or we can choose to ignore the science and statistics and pass on a history that includes heart disease, obesity, hypertension, and diabetes. The choice is ours. And it’s an easy choice!