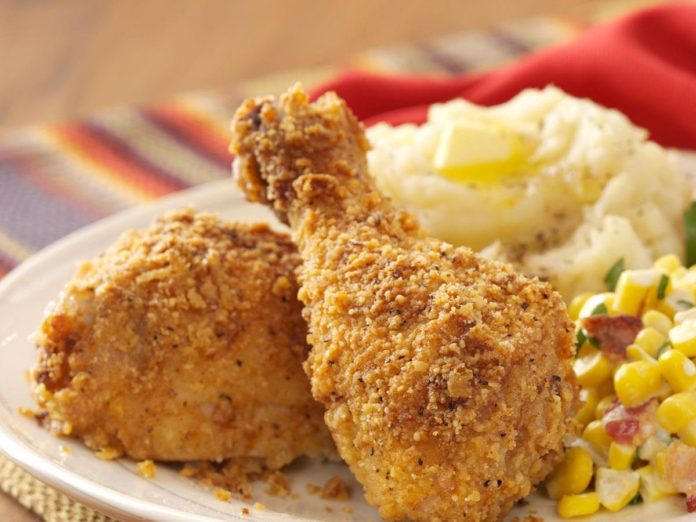 Folks in the south have a love affair with fried chicken. Many swear they have the very best finger-lickin’ good fried bird recipe that was passed onto them from way back. Hold up, wait a minute! Did you know, fried chicken is a comfort food that remarkably did not get its roots from the south?

The Scots, and later Scottish immigrants to the southern United States, had a tradition of deep frying chicken in fat as far back as the middle ages, unlike their English counterparts who baked or boiled chicken. When it was introduced to the American South, fried chicken became a common staple. When Africans were brought to these shores as slaves, many were forced to cook meals in southern households and they added seasonings to fried chicken that the Scots did not use. Soon, fried chicken became a delicious hit at dinner tables on Sundays and at holidays like Christmas. During the slave trade before refrigeration was even available, folks soon learned that fried chicken also traveled well.

Today, fried chicken is still the bomb diggity as more and more Americans crave it! Fast food eaters still manage to keep eateries like Kentucky Fried Chicken and Popeye’s rolling in the money. Even non-chicken fast-food chains are adding more fried-chicken options to the menu. Customers are increasingly reporting that they’ll consider visiting a chicken chain the next time they visit a fast-food restaurant, states the YouGov Brand Index data. According to the public-perception tracker, the chicken sector has been the No. 1 category in the fast-food business by purchase consideration and has eclipsed the burger sector by leaps and bounds.

Yes, despite the fact that fried chicken was once viewed as an unhealthy option with negative health associations, it is still a favorite for many. For those who are health conscious, you can still indulge and really enjoy eating fried chicken without the fat and guilt. We have a fried chicken recipe that is healthy, yummy and yes, crunchy! Our spicy fried chicken version strips about 260 calories and 24 grams of fat per serving.

1 cut-up chicken (clean it with lemon juice or vinegar)

*Try squeezing a smidge of lime over your chicken right before you take a bite, the tangy extra will kick the taste up a notch.