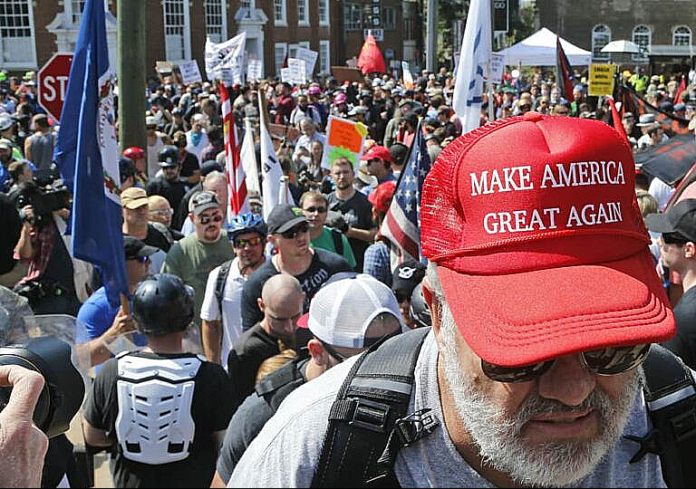 PART 1. We don’t have to be familiar with Frantz Fanon to concede that social conditions create, shape, and even determine social consciousness. Nor do we have to be conversant with Kawaida philosophy to realize that ideas do not drop from the sky, grow from the ground, or float in from the sea. They come from the society in which we live and learn to be and become the persons and peoples we are. Moreover, although there are numerous ideas which exist in society from which we may choose, the ruling ideas of any society are the ideas of those races, ethnicities, classes, and elites which rule. And if we find them oppressive and unacceptable, we have the right and responsibility to resist and radically change them.

And so, it is with “America the beautiful,” beautiful in the song’s lyrics, but not always and everywhere beautiful in life. For there is the presence of racism and White supremacy, classism, sexism, religious hierarchies, sexuality-ism, ableism, ageism, etc., not to mention consumerism, technology-worship, militarism, mass incarceration, predatory capitalism, and shades of fascism under the guise of ensuring security, American dominance, and such things. Like it or not, it is difficult and even dishonest to deny that something is radically wrong with a society that “leads” the world in mass shooting. It is certainly not what one would expect in a society that triumphantly bills itself as “the leader of the free world.” And certainly, it does not look good on the national resume to have its pretending president prompting and provoking hateful and hostile crowds to call for the cold-blooded shooting of immigrants and for the forced exile of citizens, congresswomen of color, who dare to criticize and resist injustice and oppression. And all this immoral social madness is posed and pursued under the see-through, paper-thin guise of a pathetic patriotism unworthy of either minimum allegiance or measurable acknowledgment.

But leaving Trump aside, if we can for a moment, it is clear that even before him, White supremacy appeared on these shores at the founding of the U.S. and rooted and reinforced itself in a culture of conquest, genocide, enslavement, segregation, and racism in every area of life. And it seems after centuries of bloodletting along racial, class, gender, and other lines, U.S. society has not been able to separate itself from this violent and brutal beginning. It has amendable documents which are held up on special occasions as second only to sacred scriptures, at least of two kinds. But again in life, the letter and spirit of the law, even at its best, leaves a lot to be desired and done.

For America is not a good or democratic just society because it declares itself to be. That is only proved and made possible in practice. Likewise, it is not a sane or healthy society because it has diagnosed itself as such and given itself a clean bill of health. It is how it actually lives its life and how it treats the different and vulnerable at home and abroad. There have been diagnoses and discussions of the sickness of American society, not only by religious leaders, moral teachers, and ethically conscious activists but also by psychologists and social psychiatrists. And they have rightly focused on several factors.

While conceding the complex nature of the illness, as noted above, I want to focus on racism as a source of so much of the sickness which pervades and continues to persist in America and raises its deformed and death-dealing head in many of the mass killings, such as in Charleston, 2015, Charlottesville, 2017 and recently Gilroy, El Paso and Dayton. Moreover, there is the daily domination, deprivation and degradation that racism imposes on different and vulnerable others. And again, I don’t want to deny that racism is joined hip and heart to capitalism and other forms of oppressive ideologies, relations and practices.

The point here is that the hateful, death-dealing and destructive madness that White supremacist mass shooters and their allies and enablers exhibit cannot be seen as isolated incidents of rogue replicas of “real” White men. Nor can they be rightfully seen as disturbed by themselves, products of a just, good, peaceful, loving and unarmed country, who have gone wrong. For this would not adequately explain why so many of these acts of enraged and vicious racist violence take place, if society itself is not sick, and as if its social and mental health are not at least worthy of being given urgent and critical attention.

Frantz Fanon teaches us that there is no real transformative progress in mental and social health without comprehensive and simultaneous change in other key areas of society. That is to say, in the critical areas of politics, economics, and culture, i.e., relations of power, wealth, and views and values, fundamental changes which recognize and actively respect the equal human worth, status and rights of all peoples.

So, if we are to reduce and get beyond the mass killings, it is important not only to ban weapons of war and regulate weapons purchase, transfer and use, but also deal with the context in which the gun has become a minor God, trusted in, at least in many cases, more than the God which people often claim is the most important reality in their lives. “Praise the Lord and pass the ammunition,” the gun advocate and owner says, with something resembling religious fervor. And if we add to this commitment a racist hatred, hostility, aggressiveness and will to kill, we have a problem not only in Charleston, Charlottesville, Gilroy, El Paso and Dayton, but also in the whole country. And this problem of racism must be solved along with restraint of the gun and the sick and murderous gunmen. For it is a critical source of the sickness of society that produces the sick person.

Here, it is important for treatment and transformation to concede racism is a mental disorder in spite of the reservations we might have about this being used to justify its practice, exonerate its perpetrators, deny their agency and thus undermine the right and responsibility we have to hold them accountable. However, this is a species of personal and social pathology whose diagnosis and designation as a mental sickness or disorder does not deny the perpetrator’s agency, whether it is a person or a whole society. For they can choose to free themselves from it, or embrace and embody it. There is no genetic need or compulsion to kill the different and the vulnerable. There are clearly pressures to conform and some pressures more powerful than many can resist. That is why it is important not to talk about solving the problem of racist hate and aggression outside of the social context in which it is rooted, rises from, is reinforced and takes its deadly toll. And this is also why relentless radical transformative struggle is indispensable to any serious solution.

Both the person and each society must choose what they want to be and become; they must choose to hate or love, harm or heal; to be friend or foe, ally or enemy; to welcome the stranger and immigrant or shoot them; and to kill en masse or together build the just, peaceful and people-serving society and world we all want and deserve to live in.

The other side of Danny Glover…a brilliant mind

Can’t smell due to COVID-19? Smell training may help

Verda Byrd discovers she is white after 70 years of living...

Is it allergies or COVID-19?