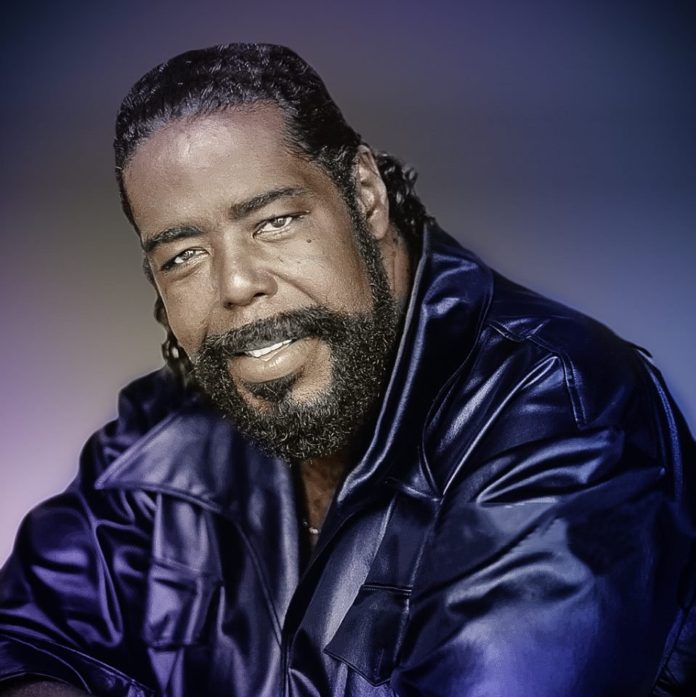 As we approach Valentine’s Day, many of us are thinking about ways in which to create that perfect romantic evening with that special someone. A good meal, a little vino, sensual lighting, maybe even a few rose petals strewn here and there will help set the right mood, but when one of Barry White’s slow jams are played, baaabyyy, the deal is sealed!

Barry’s baby-makin’ music is responsible for not only babies but lost virginities, and many a late night rendezvous. He was known as the “Maestro of Love” and his sensual tunes dominated the music charts in the ’70s. 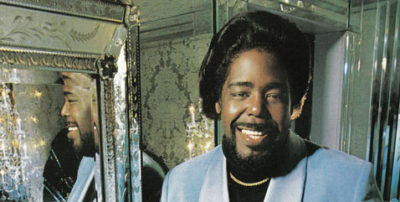 Barry Eugene Carter was born on September 12, 1944, in Galveston, Texas. Barry’s mother Sadie Marie Carter, and father Melvin A. White, never married. He later took on the surname of his father and became Barry White. Sadie moved to South Central Los Angeles when Barry was six months old. Barry had just one sibling, a younger brother, Darryl. White suffered a family tragedy in 1983 when his brother, Darryl, was shot and killed in a dispute with a neighbor over the change from a $20 bill.

It was evident early on that Barry was musically inclined. He spent his early years singing and playing the organ in church and actually taught himself how to play the piano by listening to his mother’s classical music collection. Barry never did learn to read or write music, but he  did become a multi-instrumentalist who could simultaneously create and arrange music in his head.

Growing up in a rough South Central, Barry and Darryl took to criminal and gang activities. Darryl first saw the inside of a jail cell at age 8.  As a teen, Barry eventually got caught stealing $30,000 worth of Cadillac tires and was sent to prison for four months. Barry’s incarceration changed the course of his life for the better. During his prison stint, Barry listened intently to Elvis Presley’s song It’s Now or Never, and it inspired him to do the right thing.  After prison, Barry decided that a musical career was what he wanted to pursue. In the meantime, the “Prince of Pillow Talk” dropped out of high school, married his high school sweetheart, Betty Smith, fathered four children and got divorced and before age 21.  The marriage could not survive their struggles with poverty.

Barry joined a quartet called the Atlantics, then had a stint playing drums.  He soon landed a job with Bob Keene who owned many small recording labels.  Barry found himself working with solo acts and independent groups at the various labels. During the mid-’60s, the crooner was hired to be an A&R man for Del-Fi Records. He began wearing many hats in his new role working as an arranger, session musician, and songwriter for the label’s artists. Barry continued to work in his various roles, and his career soared, but his personal musical aspirations were taking a backseat.

In 1969 he formed the group “Love Unlimited” with his future wife Glodean James, her sister Linda James, and a cousin, Diane Walker. The girl group was signed with UNI Records/MCA when their hit 1972 hit, Love Unlimited became a million album seller. During the same year, Barry wrote the classic ballad, Walkin’ in the Rain With the One I Love and the song climbed to #14 on the Billboard Hot 100 Pop Chart and #6 on the Billboard R&B chart. This was his first million-selling single as a writer and producer. Barry’s sexy, husky voice as the man who answers the phone on Walkin’ in the Rain… was the touch that actually made the recording a success.

He later secured a contract for Love Unlimited with 20th Century Records where the group recorded several other hits. Barry and lead singer Glodean James also tied the knot in 1974. The couple went on to have four children. They separated, never divorced and remained friends until his death.

While working on song demos for male singers, Barry wound up recording several demos himself. Taking the advice of a record exec, Barry wrote lyrics and re-recorded a few of the songs that were on the demos enough for an album. He wrote seven songs and released his first solo album in 1973, I’ve Got So Much to Give which included the title track. The album also included, I’m Gonna Love You Just a Little More Baby which peaked at number 1 on the Billboard R&B charts as well as number 3 on the Billboard Pop Charts in 1973. 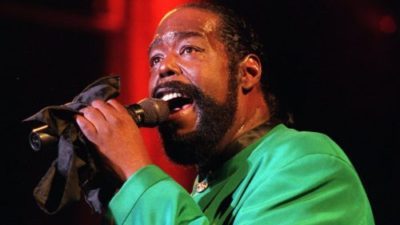 In 1973, Barry created “The Love Unlimited Orchestra ” which consisted of a 40-piece orchestral group and was initially formed as a backing band for the Love Unlimited trio. During the same year, he released the beautiful and ever-classic single, Love’s Theme which climbed to #1 on the Billboard charts. In 1974, he came up with the debut album of the Love Unlimited Orchestra titled, Rhapsody in White based on the Love’s Theme ’70’s disco era. Barry is credited by some for helping launch the disco phenomenon with his orchestral Love’s Theme. The group disbanded in 1983, but Barry still used them as his backing band on occasion.

In 1979, Barry left 20th Century to launch his own label “Unlimited Gold” with CBS/Columbia Records. As the disco era drew to a close, Barry was not able to duplicate his earlier successes, so he folded the label in 1983.

After working on more than a dozen albums in the 70s, Barry’s career waned over the next decade as he attempted small comebacks with the albums The Right Night & Barry White (1987) and The Man is Back! (1989).

Barry enjoyed a larger resurgence with 1994 album, The Icon Is Love, and his ballad, Practice What You Preach became his first No 1 hit in 17 years. Toward the end of the 90s, his songs were regularly featured on the Fox comedy series Ally McBeal and he made an appearance on the show as himself.  His single Staying Power, off a 1999 album of the same name, won Barry two Grammys.

The deep baritone voice we had come to love secured Barry voiceover work for both television and movies. He appeared as himself on the classic Simpsons, and his voice was used on Apple’s first iBook commercial. 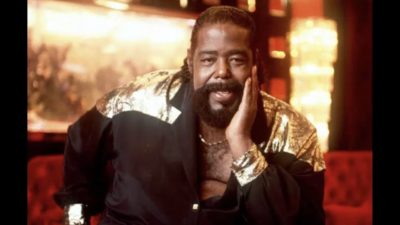 Barry’s weight issues, that contributed to his chronic high blood pressure and diabetes, caused him to not only cancel shows but resulted in several hospitalizations due to kidney failure.  While undergoing kidney dialysis that he suffered from a stoke, he took his last breath on July 4, 2003, at Cedars-Sinai Medical Center in Los Angeles; he was only 58-years-young.

The bedroom baritone’s musical gift was genius and his contributions, stellar. In his autobiography, Love Unlimited, Barry wrote…

“I see a world of beauty and perfection. And I strive through my music to spread that vision. To help make this planet we call home a better, more desirable place for us to love one another, to procreate, and to keep our spirits renewed.”

Mr. White, you certainly succeeded in spreading your vision through your music.  We miss you…