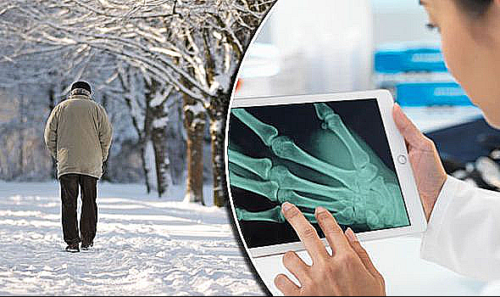 Baby, it’s cold outside! When the hawk is out, folks with arthritis swear the chilly temps affect their joints in the worst way. Many sufferers try to manage their aches and pains by reaching for pain meds, exercising, making dietary changes, or losing weight. Unfortunately, when Old Man Winter arrives, they still feel his presence in places like their knees, hips and hands.

According to the Centers for Disease Control and Prevention, arthritis causes twice as much pain and limitations for Blacks than whites.

When the weather outside is frightful, are arthritis sufferers really affected by the cold? Apparently, tales of arthritis pain as a weather predictor is not an old wives tale after all according to the Arthritis Foundation. In a study conducted three years and published in BMC Musculoskeletal Disorders, clinicians asked osteoarthritis (OA) sufferers if and how weather influenced their pain. Of the 712 respondents, over 67 percent revealed they were weather-sensitive and experienced more joint pain than their non-weather-sensitive counterparts. A 2015 study published in the Journal of Rheumatology found significant links between older people and humidity, temperatures, and joint pain. The scientists concluded that the effects of humidity on pain were more intense when temps dropped dramatically.

When it’s cold outside, and the pain in your joints is really dialed up, try these arthritis pain-relief tips; after all, they can’t hurt.