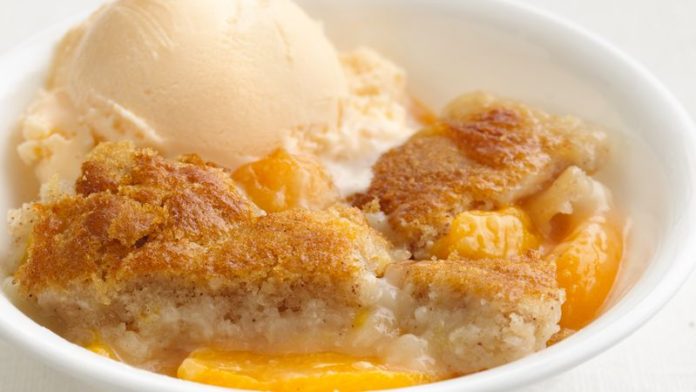 Peach cobbler was never meant to look appetizing. It was a makeshift dessert that originated in Europe in the 1800’s that somehow found its way to these shores.   Cobbled together by the early American settlers, the dish consisted of various fruits, then topped with semi-smushed clumps of biscuit dough. The fruity mix was then baked over an open fire until golden brown.

By the time the 1900’s rolled around, cobbler was officially considered a deep-dish dessert. In the south, cobblers most commonly come in single fruit varieties like blackberry, blueberry, and peach. Some cobblers are also enclosed in the crust, while others have a drop-biscuit or crumb topping. The cobbler that was preferred most in this region was the one baked with peaches, so it became a fave dessert of the south.  As a matter of fact, it did not become a southern dessert staple until sometime around the 1950’s.

Now peach cobbler is typically enjoyed warm and accompanied by a scoop/s of ice cream.

If you love a decadently delicious peach cobbler, here is a recipe you can try: