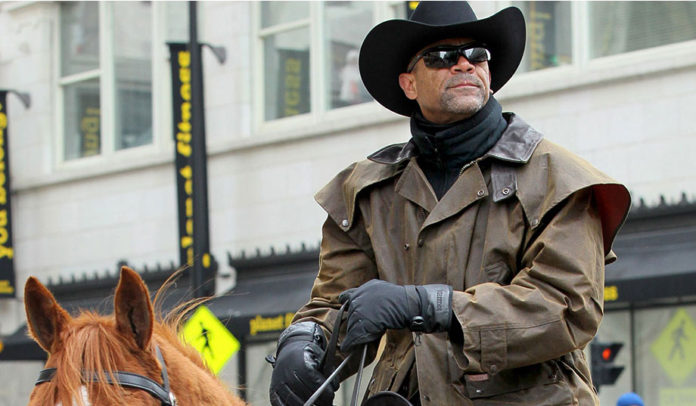 What African-American besides the uber Trump lap dog, Omarosa Manigault-Newman goes out of their way to tap dance for Trump and is a card-carrying house Negro? Well, none other than David A. Clarke, Jr., former Sheriff of Milwaukee County, Wisconsin. Clarke really works overtime to project the image of a patriot with that John Wayne, Ronald Reagan kind of vibe. He favors a cowboy hat and matching western boots in honor of his uncle’s football career with the Dallas Cowboys. A man who oozes testosterone is the image he has worked to secure, yet, he is nothing more than a race-traitor who is damaged and apparently not happy being in his own skin.

While Trump was running for president, the right-wing firebrand was an ardent supporter, campaigning for him like a puppet on a string. As a reward for his loyalty, Trump had considered appointing him to a Department of Homeland Security assistant secretary post. Clarke however, rescinded the offer because it had come to light that he had reportedly plagiarized parts of his thesis for his master’s degree in Security Studies. He also drew scrutiny for conditions in his jails that left one mentally ill inmate dead.

In addition to being one of Trump’s, “my Blacks,” Clarke has nothing positive to say about his own people. He trashed the iconic and distinguished civil rights activist, Congressman John Lewis by declaring that he was “one of the most irrelevant members of Congress.” 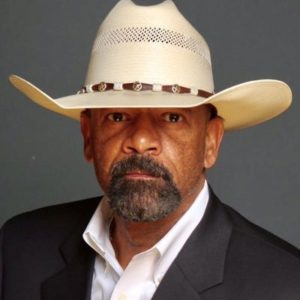 The nationally known conservative, harshly criticized the international activist movement Black Lives Matter referring to them as a “hate group,” “conglomeration of misfits,” and “subhuman creeps;” he even called for their eradication. But wait, the self-hatred doesn’t end here, two years ago, Clarke received criticism for an incendiary statement he made on his podcast: “Let me tell you why blacks sell drugs and involve themselves in criminal behavior instead of a more socially acceptable lifestyle: because they’re uneducated, they’re lazy and they’re morally bankrupt. That’s why.”

Clarke also came for Colin Kaepernick, the now-former San Francisco 49ers quarterback, who famously protested over the treatment of Blacks and people of color during the national anthem by taking a knee. Clarke stated that Colin, “reinforces the stereotype of the dumb jock.” He also referred to the now free agent as an opportunist. Clarke loaded up and fired a few shots at California Democratic Rep. Maxine Waters when she made a statement directed at Attorney General Jeff Sessions, after he was “humiliated” by Trump over his recusal in the Russia investigation. Clarke identified the outspoken, yet highly respected congresswoman as a “Black supremacist,” who “hates white people.”

The equal opportunity insulter does not only hurl rants at politicos, he’s even taken a swipe at songstress Beyonce. After her politically charged Super Bowl 50 halftime performance last year, Clarke criticized her costume and likened it to a Black Panther-type uniform. He then asked, if it would be acceptable for a white band to be out in hoods and white sheets.

And to no surprise, Clarke has been a constant critic of former President Barack Obama. He recently tweeted two rather cryptic pictures side by side, juxtaposing an image of Obama crying with an image of Trump giving a thumbs up. “OBAMA would have been found in a closet SOBBING if he had to deal with ESTABLISHMENT’S attacks. @realDonaldTrump has the metal to withstand,” he captioned the graphics.

It is pretty obvious that Clarke could be justifiably labeled an Uncle Tom because he is always looking for validation by white folks. This is a man who unashamedly once said that, “When it comes to Black men being gunned down by cops, it’s not the cops who should be blamed but the women who raised them.” So essentially, this pathetic excuse for a human being is saying that Black mothers are raising thugs?

Now, Clarke does not have any children with his white wife. Imagine, however, if he did have kids, oh how he’d be indoctrinating his offspring. They’d probably be lost, confused and so full of self-hate.

So, should Clarke really receive an invitation to the Christmas party? Hell nah! He probably would not come any old way because there’d be Black people present, his kryptonite. So as far as we’re concerned, Clarke and his cowboy getup can ride off into the sunset and by the way Sheriff… F**k you and the horse you rode in on!