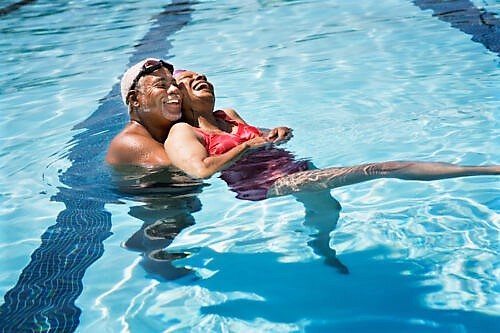 I remember when I was 6-years-old one bright summer day. I was on a New York City day camp outing at the Highbridge Play Center in upper Manhattan’s Washington Heights. The center had a gigantic swimming pool. I was standing on the side of the pool near the shallow end. A male camp counselor suddenly picked me up and for no apparent reason — just to be mean — threw me into the deep end of the pool.

My feet were unable to touch the bottom of the pool. I panicked! I could not swim! Somehow by the grace of God, I was able to get to the edge of the pool and pick myself out of the water. From that day on, I decided I was not going to be a casualty of the water. I made sure my parents provided me with swimming lessons.

Seventy percent of African Americans can’t swim, according to a report from the USA Swimming Foundation and the University of Memphis. And that makes us three times more susceptible to drowning than any other ethnic group in the country. Black children in the United States drown five times more often than white children. Drowning is the third leading cause of unintentional injury deaths worldwide. There are an estimated 360,000 reported annual drowning deaths globally.

Adults in general drown at higher rates than children. Children aren’t the only ones who need to be watched. Two to three times as many adults drown as children, and the U.S. Centers for Disease Control and Prevention reported that about 80 percent of drowning victims are age 15 or older.

Why are the adult drowning stats higher?

Many times adults engage in more dangerous water activities. We drink alcohol or don’t realize how medications mixed with alcohol can impact our health when sitting in the sun for hours.

Many older folks just don’t know how to swim. If parents don’t swim there is more than an 80 percent chance their children will not learn how to swim either, according to the USA Swimming Foundation. And so many parents, faced with the very real danger that water poses, opt to shield their children from it.

African-American celebs who have died by drowning:

Whitney Houston was one of the all-time greatest vocalists in the history of R&B and pop music. In 2012, she drowned in the bathtub of her Beverly Hills hotel room. The coroner determined that heart disease and cocaine use also contributed to Whitney’s premature death. She was 48-years-old.

Rodney King was the construction worker who survived an act of horrifying police brutality during the 1991 Los Angeles riots. King, an avid swimmer, who later became a writer and activist was found at the bottom of his swimming pool on Father’s Day, June 17, 2012. A combination of PCP, alcohol, cocaine, and marijuana were found in his system. Coroner’s officials said the drugs and alcohol, combined with his enlarged heart, likely triggered an irregular heartbeat that incapacitated him after he fell or jumped into his backyard pool.

Billy Stewart, the singer and musician who was known for such hits as Sitting in the Park and I Do Love You, died in 1970 when he accidentally drove his car into a river, killing himself and his three passengers. He was 32-years-old.

Whitney Young was a civil rights leader and executive director of the Urban League. On March 11, 1971, Whitney drowned while swimming with friends in Lagos, Nigeria. He was attending a conference sponsored by the African-American Institute.

Drowning is nothing like what you see in the movies or on TV with victims yelling, screaming, and flailing their arms. Quite the contrary, it is quick and quiet, with no warning. A drowning happens in about 20 to 60 seconds.

As the person is gasping for every breath, they are unable to speak. The victim is in a vertical position with their head bobbing, mouth usually open and with their head tilted back. By the time the drowning is noticed, the individual can be unconscious as a result of hypoxemia (a lack of oxygen) and plunge underwater.

Myth 2– Drowning people can wave for help. People who are drowning rarely have the capacity to wave. Nature instinctively forces them to extend their arms laterally and press down on the water’s surface. Pressing down on the surface of the water permits drowning people to leverage their bodies so they can lift their mouths out of the water to breathe.

Myth 3 — Drowning takes a while. Unless someone who’s drowning in the water is rescued by a trained lifeguard, they’ll only be able to struggle on the surface of the water for about 20 to 60 seconds before submersion occurs.

Myth 4 — Kids who are drowning will make noise. A red flag for caregivers of children who are playing in water is quiet. When little ones play in water they typically make noise.

Myth 5 — Someone drowning might be able to assist in the rescue. Physiologically, drowning people who are struggling on the surface of the water will not be able to stop the drowning process to reach out and grab a piece of rescue equipment. A person who is yelling for help and flailing is more than likely experiencing aquatic distress. Aquatic distress doesn’t last long, but unlike true drowning, these victims can still assist in their own rescue. They can grab lifelines, throw rings, etc.

Ironically, if you are trying to save a person who is drowning, you are putting yourself at risk. The belief is that a person who is drowning will frantically attempt to climb on top of you and can possibly drown you if you get near them. People who are actively drowning are looking for one main thing — they want their mouths above the water. They also want to be standing up or be supported by some kind of flotation. Lifeguards are trained to enter the water and support drowning victims so that they can easily breathe and are strong enough to get to safety.

Reaching for someone who is drowning from a secure position is safe. And tossing a flotation device at a victim is better than wasting time getting to the person by boat. However, if reaching, tossing, or rowing isn’t an option and someone doesn’t get the victim, they are going to drown. Calling 911 (or Mayday) and doing nothing else will result in a casualty.

There are far too many scenarios on how to handle every possible drowning situation. The main thing is not to feel completely helpless just because you are unable to rescue a drowning victim. Yes, there is danger in attempting a rescue for both the trained and untrained. But standing on the beach, boat or pool edge drowning and hoping someone else gets there in time just isn’t a strategy.

You can’t expect someone who is drowning to get your attention, according to Mario Vittone, a retired U.S. Coast Guard helicopter rescue swimmer. Here are 10 observations to look for if a person is drowning in plain sight:

The most common indication that someone is drowning is that they don’t look like they’re drowning. They may just look like they are treading water and looking up. “One way to be sure is to ask the victim, ‘Are you all right?’ If they can answer at all, they probably are. If they return a blank stare, you may have less than 30 seconds to get to them.”

The ABCs of water safety:

A: Adult supervision: You must have a capable and sober adult who can provide constant supervision when it comes to watching kids around water, and who knows how to swim and conduct CPR.

B: Barriers: A barrier is the fencing that surrounds the pool. The best pool barrier is a 4-sided fence with a self-closing and self-latching gate that opens outward. The barriers must separate the pool from the home. If the home opens directly to the pool, door alarms and locks should be installed.

SO jump in, the water is fine but remember, safety first!