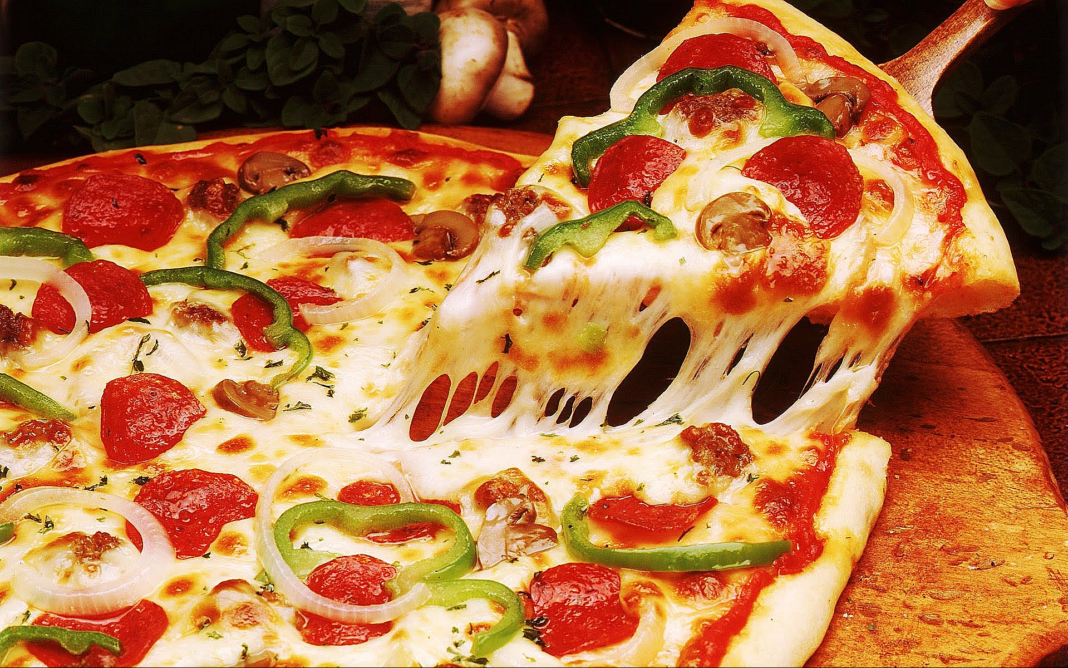 Pizza is one of the world’s most popular foods. In this country, 350 slices are eaten every second, while 40% of Americans eat pizza at least once a week. According to consumer trend reports, our go-to pizza eateries appear to be Little Caesar’s and Pizza Hut. Go figure!

There’s a reason why pizza is so popular.  We are drawn to foods that are fatty and sweet and rich and complex. Pizza has all of these components. Cheese is fatty, meat toppings tend to be rich, and the sauce is sweet. Pizza toppings are also packed with a compound called glutamate, which can be found in the tomatoes, cheese, pepperoni and sausage. When glutamate hits our tongues, it tells our brains to get excited – and to crave more of it. This compound actually causes our mouths to water in anticipation of the next bite.

Then there are the combinations of ingredients. Cheese and tomato sauce are like a perfect marriage. On their own, they taste pretty good. But according to culinary scientists, they contain flavor compounds that taste even better when eaten together.

Another quality of pizza that makes it so delicious: Its ingredients become brown while cooking in the oven. Foods turn brown and crispy when we cook them because of two chemical reactions. The first is called caramelization, which happens when the sugars in a food become brown. Most foods contain at least some sugar; once foods are between 230 and 320 degrees, their sugars begin to turn brown. Caramel is made from several thousand compounds, making it one of the most complex food products. On a pizza, ingredients like onions and tomatoes become caramelized during baking, making them rich and sweet and flavorful. That brown and crispy crust is also the result of the dough caramelizing.

While the meat and cheese on your pizza also get brown, this is due to a different process called the “Maillard reaction,” which is named after French chemist Louis-Camille Maillard. The Maillard reaction occurs when the amino acids in high-protein foods like cheese and pepperoni react with the sugars in those foods when heated. Pepperonis that become crispy with curled edges, and cheese that browns and bubbles, are examples of the Maillard reaction at work.

With bread, cheese and tomato sauce as its base, pizza might seem like a simple food. It isn’t. And now, the next time you’re about to devour a slice, you’ll be able to appreciate all of the elements of pizza that excite our brains, thrill our taste buds and cause our mouths to water.

Dr. Jeff Miller is an Associate Professor of Hospitality Management at Colorado State University who writes for The Conversation.