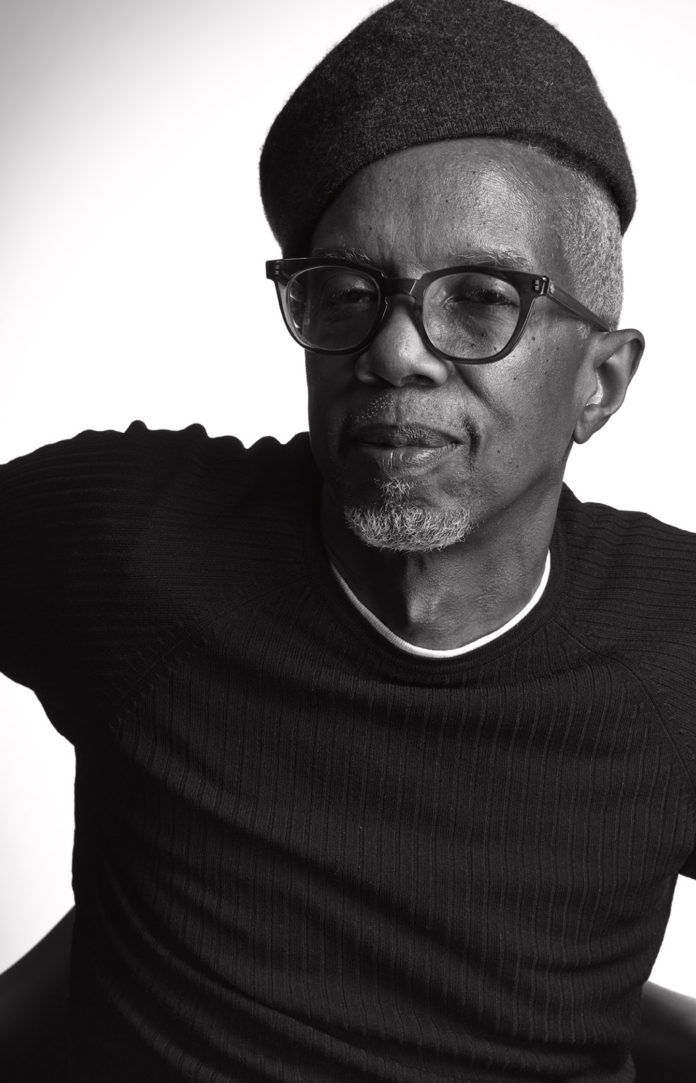 Paper hats? Why would anyone want to take paper and turn it into a riveting work of art?  Well, why not! Greg Gray whose enviable body of work as a graphic designer and art director for such stellar publications as ESSENCE Magazine, Elle Decor in London, and Maison Madame Figaro in Paris is now transforming ordinary paper into a new mode of expression of awe-inspiring, wearable sculptures for the head.

Upon returning to the states, Greg was fueled with a newfound drive that led to the creation of his own, Harlem, New York-based, graphic arts company, Little Gray House, Inc. where his clients run the gamut from publishers to mainstream corporations.  How the sexagenarian, Baltimore native, and multi-business guru juggles two artistic practices is mind-boggling, but he somehow manages to do it all with sheer ease.

Greg chats with 50BOLD.com about how he has infused all of his life experiences into simple pieces of paper.

50BOLD: What exactly is the Paper Hats Project?

Gray: The Paper Hats Project sort of started in the fall of 2012 as a fluke, a gift to a friend of mine, who had invited me to a Grace Jones concert. He had purchased my ticket, and we were going to the concert with a group of friends. As a “thank you” gesture, I decided to make a bunch of paper hats and brought them along with me in a shopping bag to the concert to hand out to the other friends in attendance. The reactions to my hats was so overwhelmingly inspiring, so immensely positive. The hats were a HUGE hit, to say the least.

50BOLD: So the paper hats idea began as a lark?

Gray: Yes, the paper hats project got its roots from the Grace Jones concert, and then it snowballed from there. When I got home after the concert, I began brainstorming, ideas kept flowing nonstop in my head about other paper hats I could create, and this soon became an obsession! I first began designing all white paper hats. I didn’t want to add color at all to the hats. I wanted folks to see the potential of paper in its own right, colorless, which lead to the creation of more artfully twisted, sculptural forms.

50BOLD: Where do your designs come from?

Gray: The ideas for my work comes from an ongoing attempt to reconcile and translate my interior world for the outside world.  Ever since I was a kid, I’ve been attracted to and fascinated by, anything that provided an escape from my reality.  I lived in coloring books, cartoons, puppets, science fiction, fairy tales, exotic people and magical places.  The Paper Hats Project is the end result of my continuing fascination with otherness and escape.

50BOLD: What’s the process involved in creating a hat?

Gray: Not sure if process is the right word for what I do, a serendipitous daydream is more like it, being open to play. Sometimes I have an idea based on something(s) I’ve seen, other times an idea will just pop into my head upon waking or when I can’t sleep. I’ll scribble a quick croquis drawing with notes and then execute it to create something that looks like a hat. After a paper hat is finished, I then rush to a mirror to celebrate and to determine, if whether it approximates my vision or exceeds it. Sometimes a hat looks nothing like the image in my head which can be a very good or bad thing depending on how open I am in that moment.

50BOLD: Have you tried creating hats made out of fabric?

Gray: The hats that I make are paper, and they work because they’re paper. I’ve been asked countless times why not try my hand at creating hats in silk or straw. I am happy with my chosen material of paper, and I love making hats with it.

I also just didn’t want to create something that would last forever. My hats are a reminder to stay in the moment because this is the only time you’ve got.  In this society, so many of us feel compelled to preserve things forever and a day; my hats go against this ingrained thinking. I am a firebrand of sorts who is challenging this long-held belief!

50BOLD: How do you store them?

Gray: Well, many of the hats simply flatten out when not in use; they can fit into large envelopes and be placed on closet shelves. My other creations that are more intricate can be kept in hat boxes and stuffed with tissue paper.

Gray: At this point, I do not sign my hats. What I plan on doing very soon is to produce multiples of some paper hats in small signed editions of no more than 1K.

50BOLD: What is the message you are trying to convey with your hats?

Gray: I want my hats to encourage play, celebrate diversity and exclusivity in adults.

50BOLD:  How can our readers contact you for more info about your paper hats?