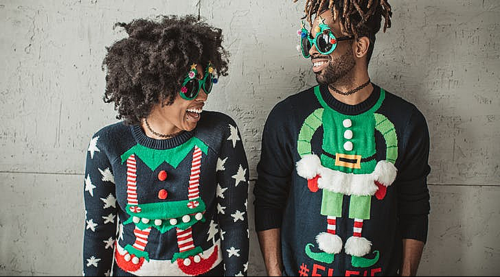 Tis the season to rock an ugly Christmas sweater. The lovable holiday eyesores have been around since the late 19th century. As Christmas became more and more commercialized, the comically ornate clothing items gained popularity in the 50s. When retailers started cranking out the tacky knits, they soon became all the rage.

The searches for ugly sweaters typically begin picking up steam after Thanksgiving, and in December, the garments are flying off the shelves of retailers.

The festive monstrosities associated with holiday cheer are practically a fashion requirement at Christmas parties and gatherings. Bad taste in knitted tops reign supreme! No sweater is too ugly; the gaudier, the better! The typical design of a truly ugly sweater is the liberal use of red and green, comically large depictions of snowmen, reindeer, and Christmas trees, LED lights, and any sort of pom-pom, tinsel, or felt applique.

Well, we’ve found some butt-ugly sweaters for both men and women that will not only make you feel all warm and fuzzy but fill you with holiday cheer!