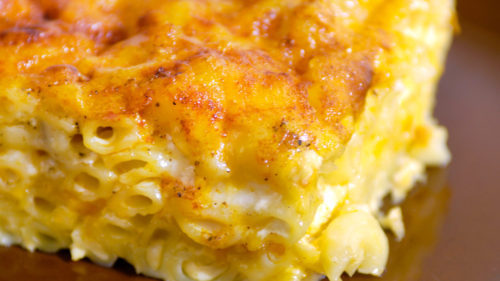 Comfort foods soothe the soul and tend to stir up memories of warm and fuzzy times gone by. One dish that most folks love, young and old is baked macaroni and cheese. The dish is a staple at family gatherings, bbq’s, church socials–gooey, cheesy and always a crowd pleaser. We sometimes make it out of a box but our preference is to bake it until it is golden and bubbling.

The comfort food got its roots in Europe but as to how it reached these shores is a mystery. Some credit the colonial settlers who might have brought it here from England. A few swear that Thomas Jefferson had sampled the dish in Europe, loved it, then when he returned to the states, tried to design a macaroni-making machine so that he could make the pasta and chow down on the dish. Well, Jefferson’s idea didn’t quite work out. He then settled on having the macaroni pasta and Parmesan cheese imported here so that he could serve it at state dinners.

Kraft Macaroni & Cheese made its splash in 1937 when this country was still in the throes of the Great Depression. The thrifty food item could serve four hungry mouths and all for a mere 19 cents. The product took off like wildfire and the company sold 8 million boxes of their cheesy wonder in its first year of business.

Now, there are such different variations of the dish. Over the years, baked macaroni and cheese has gotten pretty fancy especially at fine dining establishments but for the most part, the typical Southern style of making the dish does not involve fussy ingredients.

If you love macaroni and cheese like we do, here is a recipe for the classic that is certainly light years away from that boxed stuff!