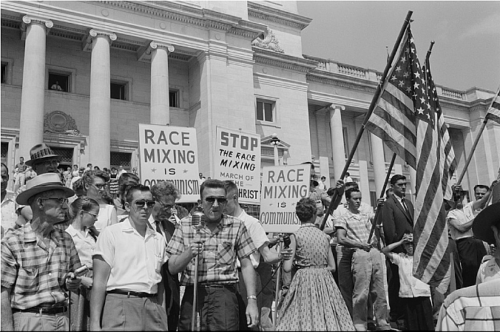 In 1954, the Supreme Court ruled in Brown v. Board of Education that racially segregated schools violated the civil rights of Black students. Black Americans throughout the country celebrated the decision as a blow to anti-Black racism.

Whites’ reactions to the case varied, depending on where they lived and whether their local communities had a history of segregation, either through laws or just local customs and practices. White students’ acceptance of this social change was significantly shaped by their parents’ political beliefs about school desegregation.

Stories of a peaceful transition to integration are less known than stories of white defiance.

The Supreme Court case was named for a lawsuit that originated in Topeka, Kansas, in 1951, opposing public school segregation. The segregationist Topeka School Board was embarrassed by the publicity associated with the case because of the history of Kansas as a state where slavery was illegal. So eight months before the landmark Supreme Court decision, the board members reversed their prior stance, resolving “to terminate … segregation in the elementary schools as rapidly as is practicable,” according to meeting minutes.

Those records also showed that some white parents threatened to withdraw their children if they were expected to share classrooms with Black students or Black teachers.

Other white parents embraced the new desegregation policy, like the parents of Clay Elementary School student Nancy Jones. Jones’ parents advised her to “be friendly with the new students and to treat them with kindness and respect.”

Although Black students began attending integrated schools in Topeka in 1954, it wasn’t until 1957 that the city assigned Black teachers to predominantly white schools. And even then, anticipating what it called “social hazards,” the School Board let white parents choose whether they wanted their kids to only have white teachers or to let the district assign students and teachers without regard to race.

The parents of Randolph Elementary School student Mike Worswick were among those who chose the latter. It was a decision that indirectly supported the integration of Black teachers.

“It turned out to be one of the best things of my life,” Worswick recalled in an interview years later. Jones, whose parents had urged kindness, was upset when she found out about the violence that erupted in other places across the nation.

“We never saw anything like that in Topeka,” she recalled in 2019.

Americans’ collective historical memory of desegregation is filled with visual images of white resistance in Southern cities like Little Rock, Arkansas, in 1957 and northern cities like Boston in 1974.

One iconic photo was taken at Little Rock’s Central High School on Sept. 4, 1957. That day, Arkansas Gov. Orval Faubus ordered the Arkansas National Guard to block Black students’ entry into the school. Local newspaper photographer Will Counts photographed one of the Black students, 15-year-old Elizabeth Eckford, after she was turned away from school. Eckford was surrounded by white students in the picture, as one named Hazel Bryan, also 15, is yelling at her.

While Bryan and her fellow students became a public spectacle, the fact that most whites did nothing was less remarked upon.

White students who supported integration knew that if they came to Black students’ aid, they risked social repercussions, or worse. Central High junior Robin Woods was “ashamed” of her peers’ behavior outside of school that September day, but did not get involved. When a Black classmate forgot his math book that day, though, Woods shared hers. That act of kindness was met with a “gasp of disbelief,” and a year of harassment followed.

Central High School senior Marcia Webb also witnessed her peers’ aggression toward the integrating Black students, who became known as the “Little Rock Nine.” At the time she was more interested in high school dances and athletic events than the emerging political storm, a racial privilege that was denied her new Black classmates.

“I’m sorry to say now, looking back, that what was happening didn’t have more significance and I didn’t take more of an active role,” she recalled. “But I was interested in the things that most kids are.”

As an adult, Webb expressed regret for her unwillingness to intervene:

“[H]urt can come from words, from silence even, from just being ignored.”

Cherise Cheney, Ph.D., is an Associate Professor of Ethnic Studies at the University of Oregon. Dr. Cheney focuses on African-American popular and political cultures, Black nationalist ideologies and practices, gender and sexuality. She is the author of Brothers Gonna Work It Out: Sexual Politics in the Golden Age of Rap Nationalism. She is currently working on the book What Do We Have to Lose? School Desegregation in Topeka, Kansas after Brown v. Board, 1953-1970. Dr. Cheney also writes for The Conversation.