Janie Washington-Bennett is on a mission to keep her beloved legendary brother’s dream alive. The retired educator is the sister of Dwayne “Pearl” Washington and CEO of the P.E.A.R.L. 31 Inc. Foundation that stands for Providing Education and Revitalizing Lives. Washington brought his charismatic style from the New York City basketball courts to become the nation’s most sought-after college recruit in 1983. The playmaking point guard was an All-American standout at Syracuse University from 1984-1986, and the master of the “shake-and-bake,” amazing fans and opponents with his uncanny court sense and ball-handling skills. He was drafted by the New Jersey Nets in 1986 and played two seasons with them. Washington then joined the Miami Heat for a year from 1988-89. Pearl, who acquired his nickname at the age of 8, after being compared to the legendary NBA player, Earl “the Pearl” Monroe, passed away on April 20, 2016, from brain cancer. He was 52.

Washington-Bennett says “Pearl” started the foundation in 2006 because he wanted to develop a vehicle that would give back to the Brooklyn Brownsville community and other similar urban areas. “He always wanted to create beneficial programs in Brownsville that would aid youth development.” Washington-Bennett shares with 50BOLD why her mission is to fulfill her brother’s dream of putting into place the kind of initiatives that can help youth excel. 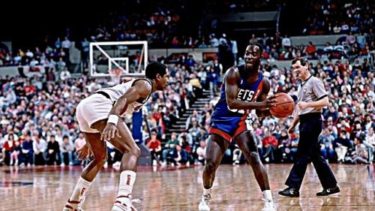 50BOLD: What qualities of your brother does the foundation promote?

Washington-Bennett: He was a very caring person and wanted to give back to his community by using sports to engage youth. The foundation wants to make a way for youth in the community. We want them to see themselves as leaders and provide all the options that are available to them.  We make our youth aware of the fact that they might not make it to the NBA but there are other alternatives available to them.

50BOLD: Dwayne had a great love for the Brownsville community and so do you! Can you tell us about your work and experience as an educator in this Brooklyn community?

Washington-Bennett: I was an educator in the Department of Education for nearly 40 years. I have always been an advocate for youth. I’ve worked at a school for pregnant teens and became a community activist. I began my teaching career in reading and language arts and received a Master’s Degree in reading and learning disabilities. I also became a grade dean for two years. One day, I decided I could better serve our youth if I were working in a disadvantaged community. So I became a supervisor of youth returning from incarceration and helped to place them in schools throughout New York City’s five boroughs.  After a few years, I saw changes in the city whereas schools began refusing incarcerated youth. More and more, the schools with a high population of whites were refusing to accept troubled minorities and kids returning from incarceration. Feelings of sheer frustration compelled me to leave my job.

50BOLD: What was your next step?

Washington-Bennett: I procured a position as a teacher in the GED shelter program in Brooklyn’s Bed-Stuy. I worked in a shelter program for several years and went back to school to obtain another Master’s in administration and supervision. Upon graduating, I was offered an assistant principalship position at a GED program in the Bronx.  I finally retired in 2008 but not for long. With the passing of my brother, I had a renewed vision of what my role was in preserving his legacy. Dwayne passed before he could develop his organization into the dream he envisioned. As his sister, who loved him dearly, I wanted to keep his dream going. I needed to honor him by keeping his legacy alive. 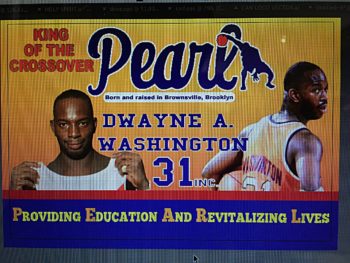 50BOLD: What would you like to accomplish through the foundation?

Washington-Bennett: What I want to do, along with the support of my family is to initiate programs centered around activities that will fuel young people physically, educationally and entrepreneurially through our Business to Basketball programs. I’m hoping many youths will be able to imagine other possibilities for themselves rather than vastly overestimating their chances of playing in the NBA where a mere 1.2 percent of college ball players are drafted.

50BOLD: Is there a scholarship aspect of the foundation? If so, how many scholarships have you awarded?

Washington-Bennett: Unfortunately, my brother never got around to outlining his scholarship plans but I have done so. Dwayne was an average student with great basketball skills. So yearly scholarships will be awarded to youth with average academic abilities who have demonstrated leadership and athletic abilities. At this time, no scholarships have been awarded because the entire program is very much still in its infancy.

50BOLD: What spurred you on to continue the work of the foundation Dwayne started?

Washington-Bennett: When Dwayne told me he wanted to do something for the youth in communities like the one we grew up in, I was all in and so willing to help. He didn’t know how the organization would be funded. I was still working on a demanding job and couldn’t give him the support he needed. Once Dwayne became ill, I knew what I needed to do.  After he passed, his dream would become mine.

50BOLD: What was Dwayne trying to accomplish?

Washington-Bennett:   Dwayne always wanted to develop beneficial programs in Brownsville that would help our urban youth. He tried to get others to help support his vision but to little avail. In order to put his plans into action, Dwayne decided to work even further on himself, so that he could serve as an example for the kids.  He decided to go back to school to obtain a master’s degree. Around this time, however, I genuinely believe he was suffering from seizures but never revealed to anyone his degree of suffering or the seriousness of his sickness.

50BOLD: Do you have corporate, private support?

Washington-Bennett:  I am reaching out to corporations now and have received some private support from friends and family. My major supporter from the very inception of the foundation was the Central Brooklyn Economic Development Corp. Now, I have a new collaborative partner, It’s All About Kidz.

50BOLD: Any support from the NBA?

Washington-Bennett: Yes, the Brooklyn Nets have been very supportive of my endeavors. The Knicks and Syracuse University have also donated items for our tribute raffle event.

Washington-Bennett: Well, I was able to initiate a project with the help of the Brownsville community to name the street we grew up on (Belmont Avenue), after Dwayne. I am hopeful that the street naming ceremony will take place before the summer is over.

50BOLD: What is your brother’s legacy?

Washington-Bennett: My brother Dwayne was a star on the court. Whenever he played, his technique was referred to as “showtime.” Dwayne received so many basketball accolades. He was the first to use a technique called “The Crossover” and was oftentimes called “The King of the Crossover!”  Dwayne put Syracuse University on the map. After my brother played at the university, Syracuse was able to recruit some of the finest players in the country.

Washington-Bennett: Along with my collaborative partner, we are starting the Summer Hoops Program.  The P.E.A.R.L. 31 Inc. Foundation is also going to provide all types of youth programs for the Brownsville community first, and then extend them city-wide.

50BOLD: What other help is needed now?

Washington-Bennett: Donations and support are always needed, especially for a budget that would allow me to put in place what is needed for the kids. We also would like to serve the community with leadership training, various workshops and other hands-on activities.

50BOLD: How can our readers donate to your organization?

Washington-Bennett: We are trying to obtain a 501c3 status for the foundation which allows for the federal tax exemption of nonprofit organizations, but meanwhile, I can be contacted directly at P.E.A.R.L. 31 Inc. at 516-660-4490. As the superhero Luke Cage once said, “You must go back, to go forward.” Dwayne’s dream is now my dream, and I will continue to venture forward to make it all happen.