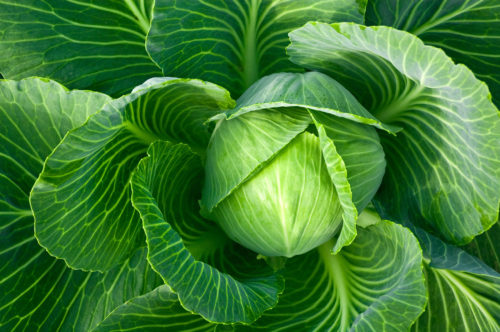 Cruciferous veggies like cabbage pack quite a powerful nutritional punch! If you are trying to lose weight, eating cabbage is a great way to start. Did you know leafy greens have a long history as not only a food but a medicine as well?

The Ancient Greeks used to prescribe cabbage and cabbage juice to treat conditions like constipation, mushroom poisoning and if someone was tipsy, it could combat the effects of intoxication.  Across the pond during World War I, the British would use cabbage leaves to treat their soldier’s trench foot and to bandage their ulcers.

The health benefits of cabbage are astounding. A few years ago, a study published in the Asian Pacific Journal of Cancer Prevention  found that “cabbage heads could contribute as sources of important antioxidant and anti-inflammatory related to the prevention of chronic diseases associated to oxidative stress, such as in cancer and coronary artery disease.” Of all the cabbages tested by the scientists, red cabbages contained the most antioxidants, while Chinese, Savoy and green cabbages contained the strongest anti-inflammatory properties.

Yet another study in Complementary and Alternative Medicine found that diabetic rats that were fed red cabbage extracts for 60 days showed reduced blood glucose levels, improved kidney function, and weight loss. The researchers concluded that cabbage actually offers “a potential therapeutic source for the treatment of diabetes.” Cabbage also contains fiber which can aid in the prevention of diabetes because it helps to slow down sugar absorption.

Cabbage is a great source of vitamin C, an antioxidant that is necessary for the growth, development, and repair of all body tissues. The vitamin is involved in such body functions as the formation of collagen, absorption of iron, the immune system, wound healing, and the maintenance of cartilage, bones, and teeth. Cabbage also contains vitamin K which is great for the skin and hair and prevents accelerated aging. Vitamin K is known to aid in blood clotting and maintain bone health as well.

The cancer-fighting compound sulforaphane found in cabbage has been associated with lower cancer risk. More recently, researchers have discovered that the sulfur-containing compound that gives cruciferous vegetables their bitter taste — sulforaphane — is also what appears to give them their cancer-fighting power. Scientists are currently at work testing sulforaphane’s ability to actually impede cancer.

Cabbage can be eaten raw or cooked, we like to serve it up Southern style. Try this yummy 50BOLD recipe for one of the greatest superfoods:

Place the bacon in a large stockpot and cook over medium-high heat until crispy. Add the onion, green pepper, and garlic; cook and stir until the onion caramelizes; about 10 minutes. Immediately stir in the cabbage and continue to cook and stir another 10 minutes. Season with salt, pepper, onion powder, and paprika. Reduce heat to low, cover, stirring occasionally, about 30 minutes more.