It may seem like an odd pairing, but Orenthal James Simpson and Donald John Trump have more in common than their middle initial. Dave Chappelle alluded to this in his Saturday Night Live monologue earlier this year after Trump took office when he said that he “hadn’t seen the nation this divided since the O.J. Simpson trial.” There’s something to that. What both the “Trial of the Century” and the election of this 45th president of the United States revealed is that race continues to be the preeminent divider in this country – and it causes blindness.

In 2016, America put white supremacy on the ballot and the result was no surprise. Just as it was no revelation in 1994 seeing the pure jubilation on the faces of so many Black folks when Simpson got a walk. The “mountain of evidence” that actually did prove that O.J. killed his ex-wife Nicole Brown and the unfortunate in-the-wrong-place-at-the-wrong-time Ron Goldman was exhibited before unseeing eyes. Similarly, droves of mostly white people – eyes wide shut – purposefully elected a misogynistic narcissist, xenophobic racist to be president. For me, the parallels are astonishing.  Excuses and rationalizations in both instances abounded. From the Simpson’s camp: “He could never do such a thing.” The Trumpeters: “He doesn’t actually mean what he says.” Okay, I’m equating two wildly different groups of people but the blindness is the same – and it’s a clear byproduct of this nation’s unresolved issues of racism.

We have to go back some 400 years and deconstruct the American history we’ve been taught to understand. Spoiler alert: What happened then, continues to impact us now. And by “us” I’m talking about our collective Black and white experiences. 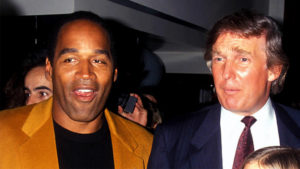 When the “settlers” arrived in America and checked their humanity at the shore, the New World’s “Great Experiment” went straight to hell. I’ll save my thoughts on what happened to our indigenous peoples, for another time. But for the purpose of this observation, I’m going to keep things in Black and white.

I’ve heard folks from both races use this analogy to explain why Black lives matter: Imagine a dinner party being held with Black and white people in attendance. When the food is served, only the whites are fed. I get it. White people need to eat – but so do Black folks. Bam! The problem with that example is that it doesn’t go nearly far enough. Consider this: The dinner bell rings again. Whites and Blacks come to the same table, but this time they bring their offspring. Food is served. And again, the food only goes to the whites. Parents are forced to tell their hungry children, “This is just the way it is. You’re going to have to get used to it.” Now imagine this scenario being played over and over again – for centuries. The sheer number of people involved is staggering. At some point (actually, pretty much all along) Black folks and their children, and the children of their children, and so on and so on want to know, “WHY? We can’t live without food!” The safest response passed down most often: “We’ve done it, so can you.” Now, that’s a crushing blow of an explanation. Hope is completely lost. Dreams can never be realized or even given an opportunity to take shape. How does one purposefully teach their child not to aspire?

Now, let’s flip it. The dinner bells ring again and again and generations of whites keep coming to the table. And, of course, they always get fed. They want to keep things status quo. Food is necessary. But now, they too, have to answer to their offspring (at least the ones who are empathetically inclined), who asks, “Why do we get to eat and they don’t?” The answer gets increasingly complicated with each generation, over hundreds of years. The vast majority of whites offer a similar response Black folks do, “That’s just the way it is.” But they can add, “Eat up!” These days, hardly any whites equate the food on their plates with entitlement. Most white folks have wrapped their entire identity in the privilege – yes, privilege – of food. For them to imagine life configured in any other order is a frightening prospect. Scared and desperate, they hold on tighter to their full plates. And if even a morsel of food happens to drop off their plate and roll onto the plate of a Black person, many would want to fight (or kill) to get it back, while others suffice in patting themselves on the back boasting of their magnanimity in allowing their morsel to be shared.

I don’t know what the solution is, but I do know we all need to eat!

I suppose I could thank D.J. Trump (no, not really), who unwittingly (how he does everything) unearthed the enormity of this nation’s racist underbelly (again) and to O.J. for keeping the issue of race, also unwittingly, (“I’m not Black, I’m O.J.!”) in the national conversation. I do think America could start to mend if America understood its own history, though. The real history, not the whitewashed one we’ve been fed. The way I see it, unless and until we face racism, openly and honestly, the problem is going nowhere and we’re all destined to go blind.