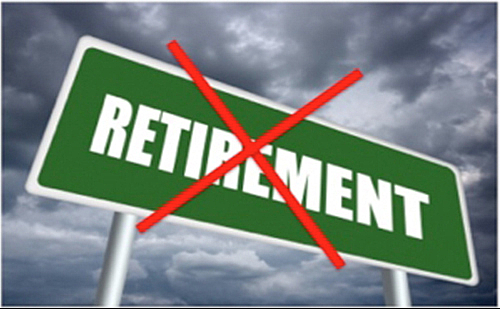 I am surrounded by talk of retirement! A few high school classmates recently retired. A cousin retired two years ago. A few colleagues have been throwing the ‘R’ word around. A close friend is thinking about retiring next year. But, for me, the term ‘retirement’ is stricken from my vocabulary; it is just not for me.

Retirement to me means sitting around for the last two or so decades of your life doing nothing really productive, and then eventually kicking the bucket.

We should all participate in meaningful and purposeful activities in our lives especially as we age. I will never forget an interview I came across back in 2009 of a Japan Times interview with Dr. Shigeaki Hinohara, a physician and longevity expert, who passed away four years ago at age 105.

During the interview, the doctor stressed how not retiring was one of his secrets to living a long, healthy, and productive life. Dr. Hinohara maintained that staying active in your senior years gives you a sense of purpose and fulfillment to keep you healthy as you age. The good doctor also advocated that life is all about contribution; he had this incredible drive to help people. Dr. Hinohara continued to treat his patients and worked up to 18 hours a day until his passing.

Retirement in America began over eight decades ago. Social security laws were passed to take care of people exiting from the workforce; it was an incentive to retire. Over time, retirement became a fact of life. Most of our parents talked about retiring and when they reached a certain age, they did.

When the Social Security Act of 1935 was established, it set the minimum age for receiving full retirement benefits at age 65. In 1935, the average life expectancy was 61; today, it is 79. Essentially, beneficiaries were receiving social security benefits for a shorter period of time, if at all.

As life expectancies trended upwards, lawmakers have ticked up the age at which full benefits can be claimed.  In 1983, Congress passed legislation that increased social security’s full-benefit retirement age. Traditionally, the age was 65, and it will gradually rise to 67 for those born in 1960 or later. This age increase was enacted as part of comprehensive legislation to strengthen social security financing at a time when the program fared a future financial crisis.

Retirement for many people is also not a real option.  Most Americans are falling short of the amount of savings required for a comfortable retirement ― if they are saving at all. Here is an absolutely startling statistical breakdown–twenty-eight percent of people over 55 have no retirement savings. Another thirty-two percent of folks over 65-plus also have zero savings.

Many obstacles can get in the way of saving for retirement that includes credit card debt, student loan debt, low wages, the need to save for a child’s college education, and a host of other lifestyle financial stressors. The lack of savings indicates that just getting started on retirement planning is a significant roadblock for many people.

Countless folks do not have a cozy 401(k) retirement nest egg to count on. In 2013, money.howstuffworks.com conducted a survey and found the average 401(k) balance of people 55-plus was $143,000, which is not nearly enough to last 30 or 40 years, even when coupled with social security.

In essence, retirement is not all that it’s cracked up to be. Simply put, you lose the daily social interaction with colleagues, mental stimulation is drastically reduced, and you’ll face hardship if you lack a comfortable nest egg.

Retirees can crow all they want about their leisurely post-employment freedom, but I say it’s for the birds!

I have set a few goals for myself during my twilight years. I want to continue working. I maintain my health by eating well, exercising, and meditating for continuous mental and spiritual growth. Most importantly, I want to keep a positive outlook on the aging process, which means focusing my mindset on happiness and satisfaction, despite society’s negative challenges on growing more seasoned.

We need to seek the things that make us feel whole, valued, and engaged, which many find in a workplace. Working, being productive, contributing to society, and not walking away from a place where I am valued is the way to go for me.

Zora Neale Hurston, one of the pre-eminent writers of 20th century African-American literature once said, “ I want a busy life, a just mind, and a timely death.”