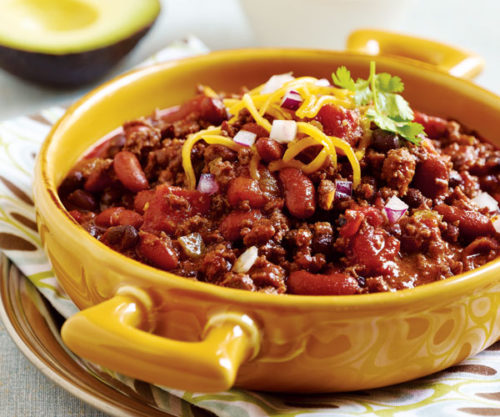 Chili is a dish for the gods!  The hearty mix of nutrients is filling, bursting with fiery flavor and oh-so-satisfying. There is, however, a shroud of mystery surrounding the origins of this one-pot crowd-pleaser. The chili lore begins somewhere around the early 1600’s with Sister Maria de Agreda. The nun never left her home in Spain but somehow had the ability to appear as a spirit draped in blue before Indians who were as far away as Texas to speak to them of all things godly. It’s been said that while in a trance-like state, Sister Maria de Agreda also spoke to these natives about a fiery red stew which over the next century came to be known as chili. The stew’s ingredients she mentioned were venison or antelope meat, onions, tomatoes, chile peppers, salt and they were to be stewed together.

When priests heard about the nun’s potent red concoction they deemed it the “soup of the devil.”  The men of the cloth also vehemently preached against the stew’s consumption. Folks apparently did not take heed as the dish grew in popularity and by the 19th century, chili had become a staple for those who resided primarily in the West. It was viewed as a cheap slop.

Fast forward to present day, the hearty dish was crowned the Lone Star’s state food in 1977. In 1993 the state legislature of Illinois went one step further to name Springfield “The Chili Capital of the Civilized World.” At its peak, Springfield boasted over a dozen chili parlors, three chili canners and exports of over four million cans per year.

Now chili has evolved into an across-the-board belly favorite and is enjoyed by everyone no matter where they live. There are also dozens of variations for it from Texas Red, Navajo Green, White Chicken, to Cincinnati Style and here is a recipe we thought we’d share with you:

Heat oil in a heavy large pot over medium-high heat. Add onion; sauté until brown. Add garlic; sauté. Add beef; sauté until thoroughly brown, breaking up with the back of a fork. Add chili powder, hot sauce, cumin, and paprika, then mix in tomatoes, beans, and BBQ sauce, salt, and pepper; bring to simmer. Reduce heat and cook until chili thickens and flavors blend, stirring occasionally about 30 minutes. Skim any fat from surface of the pot.