We all know Jenifer (yes, spelled with one ‘n’) Lewis as the brazen spitfire Grandma Ruby Johnson on the ABC-TV hit comedy “Black-ish.” Lewis, who is a veteran of the stage, and screens, large and small, has written a riveting read, “The Mother of Black Hollywood,” that takes truthspeak to another level. The memoir wells up from Jenifer’s soul rather than from a self-absorbed Tinsel Town ego. She is a woman who has had to morph into a tough broad in order to deal with life’s curveballs.

Jenifer reveals an early sexual abuse encounter by a revered pastor and of her own mother’s denial/betrayal when she sought help from her.   She also tells of the terrifying time when she had to think quickly on her feet in order to escape a harrowing situation.   A knife-wielding would-be rapist, whom she thought was a food delivery person had pushed his way into her NYC apartment. In the most ‘convincing acting role of her life,’ she led him to believe, she had contracted an STD that he was sure to get if he attacked her.

The 60-year-old actress who has played mostly mother figures, ergo the book’s title, also comes clean about her sex addiction involving the famous and not-so-famous, (yes, she names, names), singing background for Bette Midler, meeting the Obamas, working with Tupac and of loves, lost. Behind the rapid-fire, high-intensity voice that doesn’t think twice about spewing four-letter words to punctuate her points is also a woman, who has also struggled with the demons of bipolar disorder since her early 30’s.

“The Mother of Black Hollywood” embodies a raw honesty that will keep you hanging on to Jenifer’s every word. After nearly 40-years as a performer, Jenifer shows us how being an alpha female has enabled her to survive the gritty path she’s traveled from her birth in Kinloch, Missouri, to the lights on Broadway, and then onward to Hollywood.

The mother of one, spoke to 50BOLD about her life, career and even peppered the interview with a few expletives for good measure!

Jenifer: Do me a favor, it sounds lovely but don’t go through all that phase. I’m a fabulous interviewer. Listen, I’m in the middle of getting my makeup done, let’s have some fun, no excuses, no drama…and how are you?

50BOLD: I’m fine! First of all, you began your career on Broadway doing musicals. Is singing your first love? Do you think you’ll ever return to this stage?

Jenifer: Well, my first love is the stage, over film and TV because it’s happening in the moment. You are right there with that Broadway audience and all eyes are on you. They are laughing and singing along. As of right now, I plan to go back to Broadway in a one-woman show and I’m very excited about it. I’ve even written a few songs already. 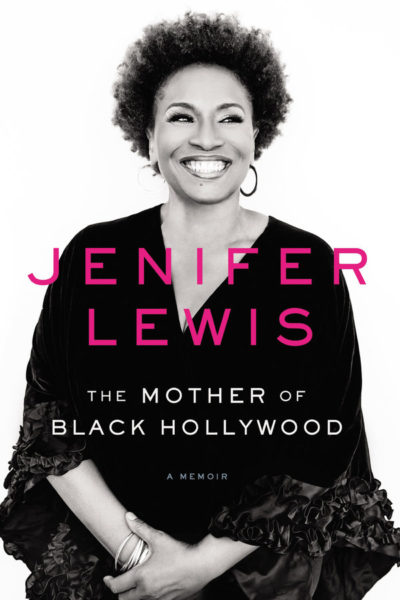 Jenifer: You’re going to have to wait awhile though because this is not happening for a long time.

50BOLD: You’ve done so many films and have, for the most part, played mother roles. As the ‘mother of Black Hollywood,’ are you the maternal, nurturing type?

Jenifer: I think I am very nurturing but I didn’t realize to what extent, until I started noticing so many young kids coming up to me to ask, all kinds of questions. So I decided to write this book to let people see this side of me.

50BOLD: What do you think of the opportunities being offered right now to Black actresses in Hollywood? Are the roles still marginalized? Are things changing?

Jenifer: Yes, things are changing because the younger generation is starting to write their own tickets. These young talented people don’t have to go to Hollywood studios anymore. They develop their own projects and produce them in a way they think it should be presented.  So yes, things are changing for Black actors in Hollywood and I am so proud of them. Every time I see one of these young Black producers, directors, writers I tell them listen, you had a black president, you better act like it, act like it! And they do! These young Black professionals are doing all kinds of wonderful things and I just admire them.

50BOLD: What are your feelings about the Harvey Weinstein controversy. In your book, you don’t mention these kinds of ‘acting couch’ situations.

Jenifer: Listen, people who do these kinds of perverted things are abusive and sick human beings. But it’s one thing to be sick and another thing to be evil. You know what I’m saying. All I have to say about this whole Weinstein thing and the like is that I’m just so proud of all the people, who are coming forward to reveal their sexual predators. It’s amazing. Times are changing, and people are saying “ENOUGH!” Enough of the injustice. Enough of police brutality. Enough of sexual abuse. “ENOUGH!” And I’ve always said there are two things that will make a person change who they are and this is a near-death experience, or they’re just fucking tired. They have to get sick and tired of something in order to say ”That’s ENOUGH!” I believe that whatever wrong you’re doing might just torment your soul on some dark night but your response could very well be, “Fuck it soul, shut up!” But I think, what’s done in the dark, will come to light. You know, what goes around comes around which is why we have to do the right thing.

50BOLD: You managed to keep your bipolar disorder under wraps for many years. How long were you in denial?   Why did you decide to share your journey publicly? When did you notice something wasn’t right?

Jenifer: My battle with bipolar disorder began happening at around age 32. When I arrived in Hollywood, I realized, I couldn’t lie in front of a camera. When that camera lens points directly at you, you know, you’ve got to be honest. I was able to hide when doing stage work because you don’t have a camera all up close and personal in your face. But when you’re doing film and that camera is right in your face, and you have to be, you know, spot on, that’s when I knew I would be found out. I didn’t know what it was but something was very wrong. So it was a very difficult transition. But of course, when my nervous breakdown happened, grief just overtook me, I’d cry, then hit the floor. And that’s when I really knew I was not well. I only wish I would have known something was wrong with me sooner.

Seven years ago, I went on the Oprah Winfrey show and admitted to millions of people that I was bipolar, it wasn’t like I was coming out but I wanted to get the word out about the disorder. I wanted to tell folks how I didn’t want to stay in a dark place, I wanted to get out and live. I was like bipolar, bath and beyond. I was very sick but I went and got help, therapy, medication, I did the work. I made the decision to get help because I wanted on my face what I saw on other people’s faces and that is, a smile.

50BOLD: How do you keep yourself on an even keel?

Jenifer: The thing about medication is that you have to be patient with your individual dosages. Everybody reacts differently to meds. Every human body is different so you have to be patient with the results you receive from them. Work with your mental health professional on finding out what med is most effective for you. You also have to incorporate therapy into your mental health regime. The talk therapy and some medication are what helped me. And you have to put in the work which is eating really healthy. I mean I run on fuel. You need really good fuel in the body if you’re going to be on the move. So I do my best to eat as healthy as possible. I exercise every day.

If I can’t exercise, then I keep it moving and do lots of walking. You have to keep the body moving, it has to be in motion. You cannot sit on your ass. After eating a large meal you can’t sit on your ass, then sit back and watch TV. You’re going to get fat. You know that! You should get up, walk around, get down on the floor, stretch out the body and do it real slow. Don’t hurt yourself. Take care of your needs, your hygiene, all that shit, everything, you’ve got to pay attention to you! Pay attention to yourself. Make yourself feel good. That’s what it’s all about FEELING GOOD!

50BOLD: What has been the most challenging moment of your career, what do you still wrestle with these days?

Jenifer: The most challenging moment of my career, that’s interesting…. Let’s talk about the most challenging because you know girl show business is the shit, it ain’t no challenge. You be doing a lot of shit. Let me tell you about the challenge of life. The challenge of life is trying to stay on the right course. You know, just trying to keep doing your best and leaving the rest. You can’t handle all this shit by yourself. You can’t! So my whole thing is just being at peace with your own soul and then just keeping it moving. You know, do what you’ve got to do. If there’s some shit over there, just don’t go over there. And after a certain age hopefully, you just stop acting like a fool because you’ve learned how to enjoy life.

50BOLD: What would you tell your younger self?

Jenifer: Shhhh, learn how to sit still and listen very carefully to yourself and surroundings. I’d tell myself that everything’s going to be alright. I would hold myself in my arms, rock me, then reinforce the following–make sure to love yourself as a child, adult and then, love the journey you’re on. I’d then say to myself, “You can do this. Now go get ‘em, girl!”