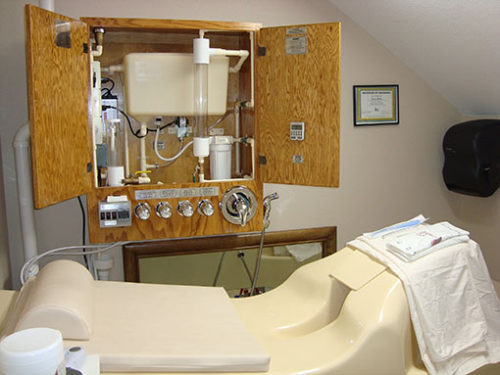 Colonic practitioners tout the benefits of colon cleansing as the detoxification of waste that is ‘stuck’ to the colon walls.  These colonic proponents swear by the procedure’s benefits–weight loss, clearer skin, increased energy and lower blood pressure.  However, most medical doctors contend that this type of “detoxifying” procedure is unnecessary, many deem it dangerous and there are several misconceptions about it that need clearing up.

Patients may look to colon cleansing as a way to “enhance their well-being,” but in reality they may be doing themselves more harm than good. Colon cleansing is a commonly used form of holistic, complementary and alternative medicine and despite its long history and current popularity, “I have yet to see a well-designed study on colon cleansing in a reputable medical journal to support its health claims,” said Dr. Ranit Mishori, an associate professor of family medicine at Georgetown University School of Medicine in Washington, D.C.  And there’s definitely the potential for harm, especially with colonic therapy, Mishori added.

The U.S. Food and Drug Administration and the Federal Trade Commission have actually taken action against several companies that were making false claims about their medical devices used for colon cleansing procedures that may result in side effects some of which were quite serious.

What happens during a colonic?

As the patient lies on a table, a colonic therapist uses a thin plastic hose to introduce a rush of water into their rectum that will supposedly cleanse the colon.  Tepid filtered water is used (up to 16 gallons). The practitioner may use a variety of water pressures and temperatures and may or may not combine water with enzymes, herbs, coffee, or probiotics that can cause an allergic reaction for some. (There have also been reported deaths from coffee enemas.) The feeling of a colonic is likened to an enema but more water is used in the process.

The patient will probably feel discomfort in the abdomen and the therapist may apply a light massage to the area to try and relieve it. When the approximately 45-minute session is over, a patient may be asked to sit on a toilet to pass any additional water and stool.  There is no odor during the procedure.

Can a colonic do more harm than good?

Colon cleansing procedures may have side effects, many serious. The colonic’s harmful effects are more likely to occur in people with a history of gastrointestinal disease, colon surgery, hemorrhoids, kidney disease, or heart disease.

In people who have had colonics, there have been reports of back and pelvic abscesses, dangerous gas accumulation, dehydration, rectal perforations, stomach pain, lightheadedness, nausea, perineal gangrene, water intoxication, coffee enema-associated colitis and septicemia, bowel perforation, kidney problems, heart failure and deaths due to amebiasis (parasitic infection of intestines).

Why is a colonic unnecessary?

Our bodies—the liver, kidneys and immune system—are all designed to keep us free of bacteria and harmful agents. The natural bacteria in the colon can detoxify food wastes and the liver also neutralizes toxins. The cells that form the lining of the colon are shed every 72 hours. This cell turnover means stool does not stick to intestinal walls, and so-called toxins don’t build up in the colon and get released into the bloodstream, as cleansing proponents contend.

Waste products are also released through the skin when you sweat.   So pumping the body full of “detoxifiers” will actually throw off your body’s cleansing processes. “So other than staying healthy or reducing stress, it’s not exactly clear how people can enhance their immunity,” Mishori said.

Will a colonic help with weight loss?

Many folks will risk a colonic because they think weight loss will accompany it. However, having many bowel movements will not make you drop pounds quickly because our bodies absorbs most calories before they reach the large intestine.

An average bowel movement weighs about 450 grams which is equivalent to about a pound. It takes around 33 hours for food to turn into poop that will leave the body. The reason why folks think they’ve lost pounds after having a bowel movement is because the evacuation process leaves people feeling less bloated and gassy.

You might lose a pound of weight or less after having a colonic. Proponents of this practice, however, will feed you false information and would have you believing that an average of 10 to 15 pounds of impacted stool will leave your body.

Regarding weight loss and colonics, excess pounds comes from too much fat. Colonics has nothing to do with the removal of fat. In order to lose disease-causing body fat, the bottom line is simple, you need to burn more calories than you consume by exercising more and eating the right foods.

If you are still wedded to the idea of getting a colonic, please do discuss it with your doctor first!