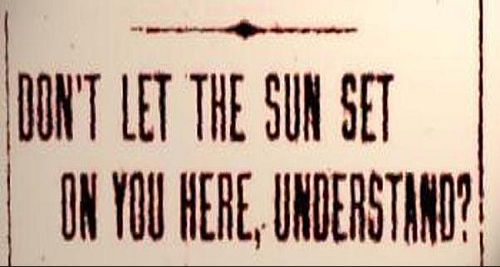 “Nigger, Don’t Let the Sun Set On You in This Town”

The horror of ethnic cleansing was dreadfully common across this nation. Between 1890 and 1968 (and really, beyond in some areas), thousands of towns across the United States did not allow Blacks on their streets or to live in their community beyond sunset. There was typically a posted sign at the edge of town warning Blacks to not let the sun go down on them while in that community.“Nigger, Don’t Let the Sun Set on You in This Town.” Blacks were allowed in town during the day to work but were expelled by sundown.

Most Sundown Towns with their “just move along” animus towards Blacks were not all in the south, as you might think, but in the north and Midwest as well. The south kept the races separate and unequal with Jim Crow laws. In the north and midwest many towns simply drove Blacks out, especially in the 1890s, and kept them out. Blacks lost their land and houses and sometimes their lives.

It was not just Blacks who were affected by this sort of thing. To a lesser degree so were Jews, Chinese, Mexicans and Native Americans, sometimes even Catholics.

This form of racial apartheid throughout America was not the only tactic used to segregate communities. Restrictive covenants or official policies ensured that homes in a community could not be rented or purchased by people of color and the Federal Housing Authority only offered mortgages to non–mixed housing developments. There were whites in communities that burned crosses on the front yards of Black homes or burned down their houses completely just to maintain the racial status quo.

Until the enactment of the Civil Rights Act of 1968, sundown towns, restrictive covenants and government aided and financed housing discrimination were legal practices in the United States. Today, it is illegal for Sundown Towns to exist on paper due to the 1968 Fair Housing Act, but some believe that communities remain sundown by reputation and reluctance to diversify.

Sundown Towns began after slavery and the Civil War when Blacks left the plantations and poured into the fabric of this nation. This was followed by the oppressive system that we know as Jim Crow, in which Black codes and laws were made for the intention of keeping Blacks as enslaved as possible despite their free status. Countless communities across this land feared those Blacks who had  “invaded” neighborhoods so they established Sundown Towns to evict Black residents and not allow them in.

Remember the famed Route 66, the 2,440-mile “road of dreams” that symbolized a pathway to perhaps a better life? Well, not for Black people! The recommendation for us was that we avoid the route altogether. Road travel for Blacks would mean traveling with portable toilets, bedding, gas cans, and ice coolers. Why? Well, we weren’t allowed to eat, sleep, use the restrooms or even get gas at white-owned establishments. Even Coca-Cola machines had “White Customers Only” printed on them.

In 1930, 44 out of the 89 counties that lined the “rope route” were all-white communities known as Sundown Towns. On Route 66, every mile was a minefield. Businesses with three “K”s in the title, such as the Kozy Kottage Kamp or the Klean Kountry Kottages, were code for the Ku Klux Klan and only served whites. The road bore witness to racial terrorism that included such heinous acts as lynchings.

Despite all the dangers, millions of Black vacationers, did explore the country—many relying on a unique travel guide, The Negro Motorist Green-Book published from the 30s to the 60s by Victor H. Green. The resourceful guide book steered traveling Blacks to places that were willing to serve them. Sadly, segregation was still in full effect during the time of the book’s existence; Jim Crow had zero borders.

Over time, the term “Sundown Town” faded but sundown suburban areas still exist. Often, we have these notions that communities look the way they do for no particular reason. But if you research why your town looks the way it does, you might find policies that were intentionally exclusionary.

If you’d like to read more about Sundown Towns check out the book Sundown Towns: A Hidden Dimension of American Racism by James W. Loewen. The author also maintains a database of potential Sundown Towns to this day.