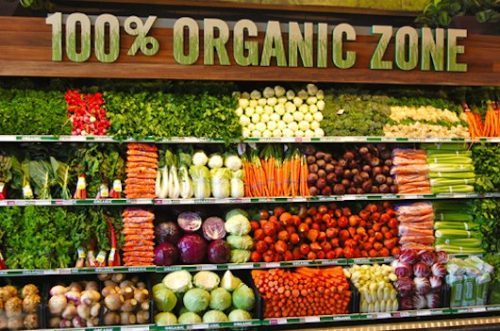 Hopefully, as we age, we’re being more mindful of the kinds of foods we put in our mouths.  Making conscious choices about food is taking a major step in the right direction with regards to staying healthy. Going the organic foods route is a move we can consider making.  The foods can be found everywhere, even in popular supermarket chains where once-upon-a-time, organic offerings were hard to find.

According to Johari M. Kunjufu’s Commonsense Approach to Eating: The Need to Become Vegetarian “Our survival as Afrikan people demands work,” Kunjufu argued, and “the fullest potential energy and brain power…will only come from a state of health” based on an organic and vegetarian diet. Over the last few years, African Americans have dramatically expanded their foothold in the organic and vegetarian marketplace.

Still, there are many of us who don’t understand or have misconceptions about organic foods, so let’s clear up a few of the mysteries:

What does the label ‘organic’ mean?

Organic produce and other ingredients are grown without pesticides, fertilizers made from petroleum products or sewage sludge, genetically modified organisms or ionizing radiation. Animals that produce meat, poultry, eggs and dairy products do not take in antibiotics or growth hormones. Companies that handle or process organic food before it gets to your local supermarket or restaurant must be certified, too.

How do you know if something is truly organic?

Why is organic food so expensive?

Organic food is not as in-demand as conventional food. The production costs for organic food cost more and farmers don’t produce enough of a single product to lower the overall cost. However, there are some food items like coffee, cereal, bread, and even hamburger that may cost the same or even less than their conventional counterparts.

According to industry watchers, when the demand for organic food goes up, their prices will come down.  There are other costs that come into play that accounts for the higher pricing. Organic farmers don’t receive federal subsidies like conventional farmers, their farms are much smaller and they have to hire more workers for tasks like hand-weeding, cleanup of polluted water, and the remediation of pesticide contamination.

The Organic Farming Research Foundation explained the reasons for the higher costs of organic food: “The organic price tag more closely reflects the true cost of growing the food: substituting labor and intensive management for chemicals, the health and environmental costs of which are borne by society.”

Is organic food better for you?

There are some published reports that have shown organic foods to be nutritionally better for you. Researchers at the University of California, Davis, recently found that organic tomatoes had higher levels of phytochemicals (various biologically active compounds found in plants) and vitamin C than conventional tomatoes.

On the flip side, according to the National Research Council, the traces of pesticides left on conventionally grown products are unlikely to cause an increased cancer risk. Also, if fruits and vegetables are properly scrubbed, most of the chemicals can be removed.

Well, taste is an individual thing but many chefs believe that organic food has a superior taste and quality. Since organic food is grown on well-balanced soil you would think that produce especially would taste great. But again, the entire taste factor thing is up to you.

Do you need to buy all organic food?

You don’t need to buy all organic food according to The Environmental Working Group’s Shopper’s Guide to Pesticides that has a “Clean 15” list of the 15 types of produce with the least amount of pesticides. Save your money for the other organic produce and buy the conventional versions of these: