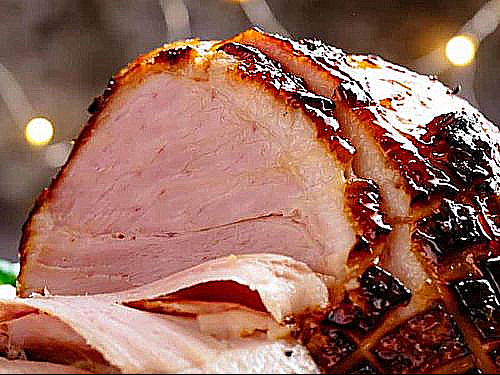 Many folks enjoy eating ham, especially at Easter. Remember when our parents, grandparents would dress up a ham by scoring it and sticking cloves in each criss-cross, or dressing it up with pineapples/cherries or a heavy glaze?

Ham is a real crowd-pleaser and it often comes pre-cooked, so all you need to do, most of the time, is warm it up, slice, and serve. If you’re considering cooking a ham for a holiday meal, it can get confusing as to what sort of ham you should buy.

There are so many kinds of hams, do you know how to choose one? What should you look for?

Fresh ham: Uncured leg of pork; must have “fresh” as part of its name. Fresh hams have the same color and texture as a fresh uncooked pork roast and must be cooked before eating.

Fully Cooked: The ham has been fully cooked in the establishment where it was processed. It can be eaten out of the package or reheated to 145°F. It is also labeled as “ready to eat” and “eat and serve.”

Cured ham: A leg of pork can be cured in one of two ways: brined or cured with a dry rub and hung to dry. These hams are deep rose or pink in color and can be sold ready-to-eat or may require cooking. Always check the label — hams that need to be cooked must be labeled with cooking instructions.

Smoked ham: Smoking is another form of curing. Before a ham is smoked, it is first salt-cured or brined to control the development of bacteria during smoking. It then spends many hours, days even, in a smokehouse to allow the essence of hickory or maple smoke to slowly infuse the meat. The meat doesn’t “burn up” because the smoking temperature is low, below 100F, that’s why this slow process is called “cold-smoking.”

Canned ham: Remember those canned DAK hams? Canned hams used to be really popular back-in-the-day.  The boneless hams are actually composed of scraps of pork that have been cured, pressed into a can, and steam cooked. A small amount of natural unflavored dry gelatin may be added before sealing to absorb the ham’s natural juices.

Boiled Ham: Boneless and fully cooked in water and processed in various shapes in a can or casing.

Picnic ham: Sometimes the front shoulders of a hog are smoked and called “picnic hams” but they’re not really ham cuts, there are pork shoulders cured in ham fashion.

Country ham: This kind of ham is saltier and drier than mainstream supermarket ones. It must be made from the hindquarter of the hog, including both the leg and shank bones; the meat is buried in salt, sugar, and spices for about five weeks. If you want to cut down on the salt content, soak the ham in cold water for at least 24 to 72 hours before preparing.

Ham shank: The ham shanks are located lower down the hog’s leg. Shank end hams are pretty enough to be a centerpiece for a holiday dinner in addition to being the main course. However, the meat on a shank end ham tends to be fattier and less tender than the meat you’ll find in a butt end ham.

Butt end: The butt end of a ham is meatier but contains more fat than the shank end of the whole ham and is harder to carve because it contains the hip and pelvic bone.

Honey-cured ham: A honey-cured ham is cured using honey. The sweetening agent in the cure must consist primarily or entirely of honey for this label to be accurate. The honey used must be at least grade C in terms of quality. The honey flavors the ham, making honey-cured hams just as sweet as they sound.

Bone-In ham:  Just like chicken, a bone-in ham has more flavor because the bone itself imparts flavor into the meat. Plus, you definitely want the bone for later, to make soup.

Spiral ham: Spiral slicing is all the rage in hams, it’s definitely an impressive way to serve ham to a lot of people, thin-sliced in spirals.

A beautiful glaze definitely makes your ham look more appetizing and also enhances its flavor. The sweetness of the glaze pairs perfectly with the saltiness of the ham.

Here is a simple recipe for a glaze that will make everyone keep coming back for more: