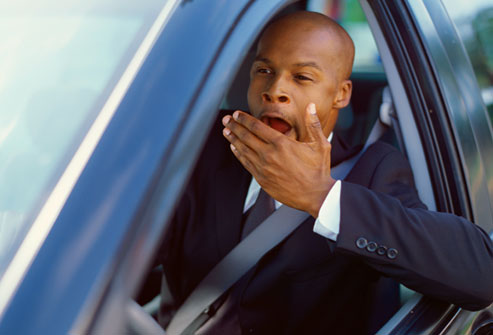 Drowsy driving is a major problem in the United States and the risks, and tragedies associated with it are frightening. This usually happens when a driver has not slept enough, but it can also occur due to untreated sleep disorders, medications, drinking alcohol, shift work or commercial driving.  African Americans have a poorer sleep quality overall associated with worse insomnia levels and the highest levels for excessive daytime sleepiness. That increased fatigue and sleepiness can cause difficulty with drowsiness while driving.

Similar to taking a drink of alcohol, sleepiness slows reaction time, dampens awareness, impairs judgment and most of all, increases the likelihood of getting into a fatal automotive crash. “All of these things can increase your chances of making serious errors behind the wheel. Studies show that being awake for more than 20 hours results in an impairment equal to a blood alcohol concentration of 0.0, the legal limit in all states,” warns Russell Rosenberg, Ph.D., a clinical psychologist, and board-certified sleep specialist.

There are few drowsy driving laws around the world, as drowsiness is often not measured or tested on the road. It takes a deeper investigation by police to determine whether drowsiness may have been a cause of an accident; it’s often subjective, which makes it difficult. Even though law enforcement now recognizes the dangers of driving while drowsy, only two states thus far (Arkansas and New Jersey) have laws in place that will charge a fatigued driver involved in a motor vehicle accident. Several states are now considering legislation that would allow police to charge drivers with criminal negligence if they injure, or kill someone while driving without adequate sleep.

“Many people acknowledge momentary sleep episodes, like head nodding, also known as micro-sleeps, but fail to appreciate the danger. If you lapse into sleep for 2 seconds, your car is out of control for almost 60 yards which is more than half a football field and plenty of time to get into big trouble,” according to Dr. Rosenberg, who is also the founder and director of the Atlanta School of Sleep Medicine and Technology, and the former director of the National Sleep Foundation. He goes on to explain how drowsy drivers tend to underestimate their ability to stay awake when they are sleepy and feel compelled to operate their vehicle despite being tired. “Sleep is a biological drive that cannot always be controlled. It is possible to fall asleep for a few seconds and not even realize it. A few seconds is all it takes to crash. Many drivers underestimate the degree of impairment that sleepiness causes.”

The National Sleep Foundation’s fatigued driver stats survey states that a whopping 60 percent of adult drivers, 168 million people, say they have driven a vehicle while feeling drowsy. Over one-third or 103 million people have actually fallen asleep behind the wheel. According to the National Highway Traffic Safety Administration falling asleep while driving resulted in an estimated 72,000 crashes, 44,000 injuries, and 800 deaths each year.

Be smart, don’t drive yourself to an early grave. If you start to exhibit any of the following behaviors while operating your car, put the brakes on your driving pronto:

Dr. Rosenberg says that trying to combat drowsiness by rolling down car windows and turning up the radio is just an exercise in futility. These suggestions just do not work!

If you do find yourself nodding at the wheel follow these tips: