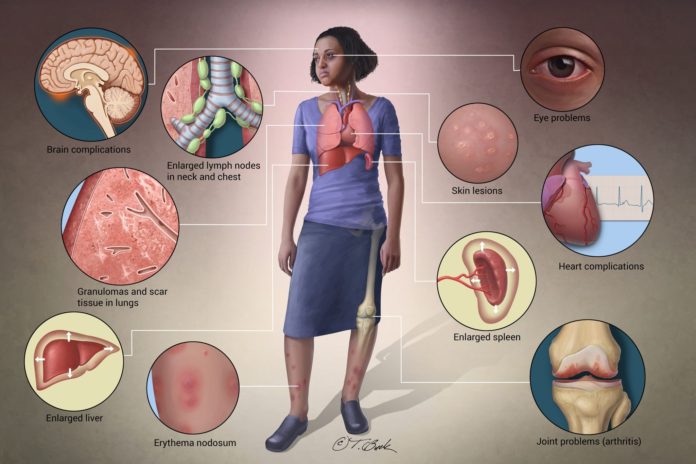 Sarcoidosis sounds like a scary word that you don’t hear too often but it is a condition that affects as many as a million people around the world — including big celeb names like boxer Evander Holyfield, songstress Angie Stone, TV Judge Joe Brown, actress Tisha Campbell-Martin and NBA legend Bill Russell. Actor and comedian Bernie Mac lived with sarcoidosis for 25 years and set up a foundation to improve patient care and find a cure.

Sarcoidosis is an inflammatory disease that affects one or more organs but most commonly the lungs and lymph glands. The inflammation causes abnormal lumps or nodules (granulomas) to form in one or more organs of the body. The granulomas may change the normal structure and possibly the function of the organ that is affected. Sarcoidosis is not contagious. This means you can’t catch sarcoidosis from another person who has the disease. Cigarette smokers are also not at increased risk of developing it.

The exact cause of sarcoidosis is still pretty much unknown. It can just spring up suddenly and then just disappear. Its symptoms can also just come and go as well over the years. Some clinicians believe that the disease is brought on by an abnormal immune response. In a healthy person, for example, inflammation occurs as the cells of the body’s immune system come together to battle the intruder at an organ or tissue site. In a person who has the condition, cells that come to fight wind up sort of clumping together into small lumps and these are what is referred to as granulomas.

The most common areas of the body that are affected by the disease are the lymph nodes, spleen, lungs, eyes, skin, liver, heart, and brain. The lungs are most affected in 90 percent of cases. As far as which kinds of foreign invaders trigger the body’s abnormal response is what researchers find puzzling–fungi, viruses, chemicals (insecticides), environmental (like exposure to mold), or bacteria are probably the likely culprits.

Who is most likely to develop it?

Race, gender, and genetics increase the risk of developing the condition. Sarcoidosis is more common in women than in men. African-Americans are about 3 times more likely than whites (11 cases per 100,000) to have sarcoidosis.

African-American women are the most commonly affected group with nearly a 3 percent lifetime risk for developing sarcoidosis. In African-Americans, the condition also tends to be chronic, involve several organs, and can lead to death.

If a relative has sarcoidosis, a family member is at a higher risk of developing it compared to the general population. However, while family members are at higher risk, less than 1 percent of first-degree (parent, sibling, child), and second-degree relatives (grandparents, aunts, uncles) of sarcoidosis patients develop the disease.

How is it diagnosed and what are the symptoms?

Diagnosing sarcoidosis can be difficult. Someone with sarcoidosis may not have any symptoms at all, yet it is often discovered during a routine checkup. On the other hand, symptoms can be similar to those of other diseases, such as arthritis or cancer. Your doctor will run a variety of tests to make a diagnosis. The disease is most often detected by a chest x-ray or chest CT scan, which most commonly shows enlarged lymph nodes and granulomas.

General symptoms, however, may include:

Lung symptoms may include:

Skin symptoms may include:

Eye symptoms may include:

Heart symptoms may include:

The outlook for people living with sarcoidosis is generally good. There is no cure for sarcoidosis but in half of the cases, symptoms will often improve with or without treatment. A medical provider, however, will want to monitor a sarcoidosis patient with routine chest x-rays and exams of any involved organs. If someone has a severe case of the condition, a physician will most likely treat them with any one of the following:

If you or a loved one has been diagnosed with sarcoidosis, get informed and read all you can about it; arm yourself with knowledge! Contact: