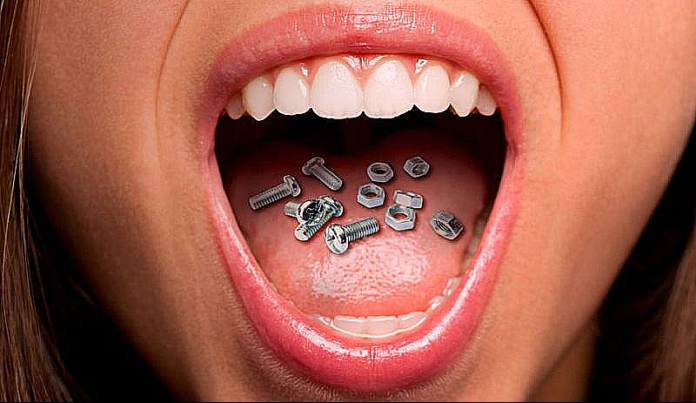 Lee Tarver, 63, suffers from pica, an eating disorder that many may deem bizarre. The Columbus, Georgia, administrative assistant has to get her daily fix of starch and not on clothing. She loves eating cornstarch right out of the box. Lee admits her craving is not the norm. “I don’t cook with it, I just consume it in its powdery form. Sometimes I find myself going through two boxes of cornstarch a day. I’ll also resort to eating pieces of chalk and baby powder if I can’t get my cornstarch fix,” admits the grandmother of two. “And I can’t seem to stop this addiction. I just love the texture of the substances as I chew them.” Lee claims, that eating the nonfood items has so far not seriously hurt her.

Lee is part of a surprisingly growing number of people who suffer from (pronounced “PIE-ka”), the consistent compulsion to eat things that should not be consumed. According to medical literature, people who suffer from this disorder have been known to eat relatively harmless items or potentially dangerous items that can harm them. Folks with the disorder might eat something like paper and a lot more besides: dirt, ashes, insects, grass, cigarette butts, paste, paper, paint chips, metal, cornstarch, ice, sand, baby powder, matches, cardboard, hair, laundry detergent, chalk, and soap, among other things.

Dirt is, in fact, a favorite among pica eaters.

Some of these strange nonfood-food obsessions have names of their own. Geophagia is clay eating. Pagophagia is ice-eating. Amylophagia is cornstarch eating. Geophagia is especially common in older Black women who live in the south. Some pica sufferers even crave their own hair, eating it by the handfuls until it wads in their stomachs and requires surgery.

Why do some people eat non-food items?

Cornell University’s assistant professor of global health and nutrition, Sera Young, Ph.D., says it’s often thought that slaves introduced the practice of pica to the U.S. from sub-Saharan Africa during the trans-Atlantic slave trade. But Dr. Young says this behavior was practiced independently among Native American populations long before Columbus arrived. Many slaves in the south during the 1800s were known to have consumed clay and soil. During the ’50s and ’60s, the practice of eating clay was still so popular in the south that lunch bags filled with the substance were actually sold at Alabama bus stops as snacks for travelers. Family/friends who went north would oftentimes receive packages from folks in the south full of bags of clay for consumption. There are some estimates that state how clay-eating goes back as far as 200 years.

There are oftentimes cultural reasons for consuming the inedible items. For example, pica is practiced in a few areas in Nigeria, where people eat kaolinite (a kind of clay) to get rid of diarrhea. In some parts of Mexico, magnesium carbonate blocks are sold in drug stores and labeled cathartic. Dirt has been used as a remedy to cure nausea in pregnant women during their first trimester in certain parts of Australia and the Middle East. Besides helping to subside nausea, there are also those who also believe that the minerals found in dirt can actually enhance fertility.

What are the complications from pica?

How is pica treated?

Folks don’t typically want to reveal their addiction, either because they are embarrassed or see nothing wrong with what they are doing. The first step in getting cured of pica is to admit to a physician that there is a problem. Unfortunately, doctors can’t tell whether their patients are consuming nonfoods. It is still also not known if pica is caused by vitamin and mineral deficiencies or if it is a learned social habit. Most people with pica suffer from iron or zinc deficiencies. But doctors are not sure if the deficiency triggers the craving or if the craving creates the deficiency.

Before a patient receives a diagnosis of pica, the pattern of behavior must be present for at least a month. Since lead poisoning has been associated with pica, close medical monitoring is necessary while the patient is being treated for the condition. A physician will also oftentimes work in collaboration with a mental health professional who is knowledgeable in the treatment of pica because it has also been classified as a psychiatric condition. People with certain mental health conditions, such as schizophrenia and obsessive-compulsive disorder (OCD), may develop pica as a coping mechanism.

There are no lab tests for pica. If a physician is informed by the patient about their disorder, they will then assess for mineral or nutrient deficiencies, blocked intestinal issues, possible toxicity, or even parasites from the non-food items that were eaten. A series of blood work, x-rays, and other tests may also be done to ensure there are no severe health issues. A physician might recommend a course of vitamins that can be added to a daily regimen in hopes of correcting any deficiencies.

For more information about pica, contact the National Eating Disorders Association or call 800-931-2237.