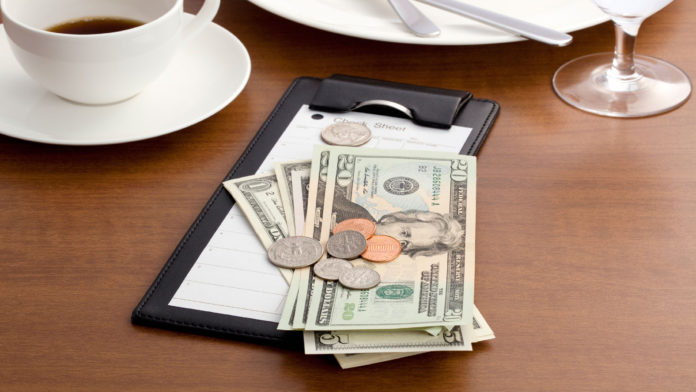 Have you ever been to a restaurant with a group of friends and when you receive the bill, everyone is deciding on what the tip should be?  Then, somebody blurts out, “Double the tax!”  Well, doubling the tax is wrong!

Tipping is an expected practice here in the United States. Surprisingly in other countries like Japan and New Zealand, not only is tipping not customary but even offering one would be considered insulting or demeaning. On these shores however it is all about a gratuity and if the amount left is inadequate, it is considered bad etiquette or unethical.

The act of tipping in restaurants is a borrowed custom from Europe. According to Michael Lynn, Ph.D., professor of Food and Beverage Management at Cornell University’s School of Hotel Administration, tipping in the United States began in the late 1800s. Wealthy Americans traveling to Europe observed tipping and brought the aristocratic custom back to the States to “show off,” or prove their education and class.

Many would agree that the American tipping custom has gotten out of hand. For one, tipping jars can even now be found on the cashier counters of fast-food establishments like Dunkin’ Donuts and Chipotle.  Quite a number of folks would argue that the services rendered by those who ring up and bag their orders should be covered by the wages they earn.

A world without gratuities, however, is still a long way off.

The act of tipping is actually a kind of supplementation of a server’s wages which are in many cases less than the minimum wage.  Restaurant servers might not receive all of the tips that are left to them by a customer. In many instances, they must donate their tips to a tipping pool to help support the restaurant’s back-of-the-house staff–kitchen workers, bartenders, bussers–who do not receive tips directly.

According to the Emily Post Institute, the premier standard of etiquette; for waiter/waitress service it is 15% of the bill (pre-tax) for adequate service and 20% for excellent service. If the service you received is superior, you should tip a more significant amount. If the service was not up to par, instead of not leaving a tip, you might consider giving your server 10%. Not leaving a tip when a server performs their job poorly does not correct the problem. Instead, consider having a conversation with the establishment’s manager about the subpar service received.

Large groups with high tabs reportedly tend not to be so generous as you’d expect with their tips. In an effort to avoid this issue, many restaurants add an automatic gratuity to parties of six or more; often the gratuity is set at 18%. If you have a large party of six or more, verify that the gratuity is being added to the bill to avoid double tipping.  It is also customary to calculate tips prior to tax.

Specific ethnic groups and Millennials have been stereotyped to be less generous tippers than others, and restaurant owners have gotten hip to this, so many have added a 15% to 20% tipping amount onto a dining bill so that their waitstaff doesn’t get stiffed. On the flip side, those over age 55, according to surveys, are the best tippers oftentimes leaving a 20 percent gratuity.

So how is a tip calculated?

What’s a quick way to determine a 20 percent tip for example?

If you want to make sure to cover all of your tipping bases, take a few tips from the Emily Post Institute, created by etiquette expert Emily Post, who was the ultimate authority on how to behave graciously in society and business:

Waiter/Waitress–15% of the bill (pre-tax) for adequate service; 20% for excellent service; no less than 10% for poor service

Host or Maitre d’–No obligation for greeting you and showing you to your table. $10 to $20 for going above and beyond to find you a table on a busy night or on occasion, if you are a regular patron

Tipping Jars–No obligation; tip occasionally if your server or barista provides a little something extra or if you’re a regular customer.

Food Delivery Person–10% to 15% of the bill, $2 to $5 for pizza delivery depending on the size of the order and difficulty of delivery

Hairdresser–15% to 20% (It is now acceptable to tip the owner unless he or she says otherwise.)

Bellhop–$2 first bag; $1 per additional bag; $2 to $3 for each additional service, such as room delivery

Housekeeper–$2 to $5 per day, left daily with a note marked “Housekeeping – Thank you.”

Our young people can’t move us forward without healthcare!