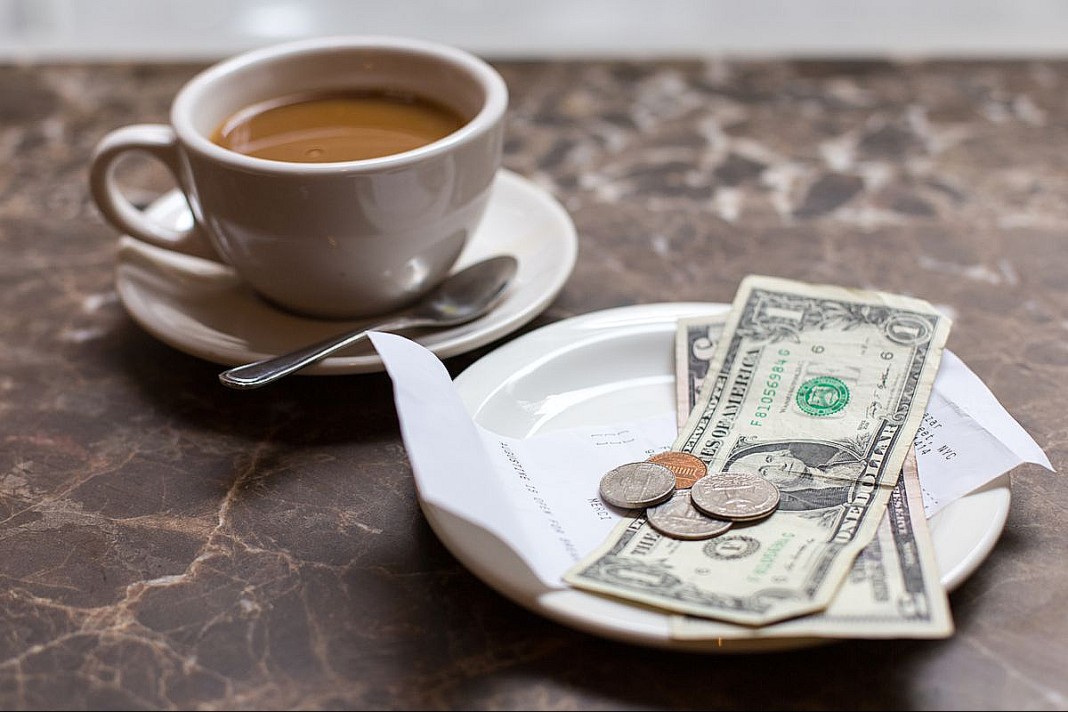 Tipping is an expected practice here in the United States. Surprisingly in other countries like Japan and New Zealand, not only is tipping not customary but even offering one would be considered insulting or demeaning. On these shores, however, it is all about a gratuity and if the amount left is inadequate, it is considered bad etiquette or just plain old cheap!

The act of tipping in restaurants is a borrowed custom from Europe. According to Michael Lynn, Ph.D., professor of Food and Beverage Management at Cornell University’s School of Hotel Administration, tipping in the United States began in the late 1800s. Wealthy Americans traveling to Europe observed tipping and brought the aristocratic custom back to the States to show off, or prove their education and class.

The COVID pandemic made folks tip a little more generously, at least 20 percent in many instances, because fast-food workers, kitchen staff, and delivery drivers who helped transport food and other necessities to our doorsteps were looked upon as heroes. But now, according to Dr. Lynn, the generous tipping rates didn’t hold steady. Seasonal fluctuations also affect how people tip, as does location, and these factors were compounded by the virus’s effect on the foodservice industry.

Yet, many would agree that the American tipping custom has gotten way out of hand.

The act of tipping is actually a kind of supplementation of a server’s wages which are in many cases less than the minimum wage. Restaurant servers might not receive all of the tips that are left to them by a customer. In many instances, they must donate their tips to a tipping pool to help support the restaurant’s back-of-the-house staff–kitchen workers, bartenders, bussers–who do not receive tips directly.

Not long ago, an acceptable tip at a restaurant was 15 percent. Now, if you glance at the bottom of your receipt, tipping suggestions begin at 18 and end at 22 percent.

A rule of thumb for tipping is if the service you received is superior, you should tip a more significant amount. If the service was not up to par, instead of opting not to tip, you might consider giving your server 10%. Not leaving a tip when a server performs their job poorly does not correct the problem. Instead, consider having a conversation with the establishment’s manager about the subpar service received.

Large groups with high tabs reportedly tend not to be as generous as you’d expect with their tips. In an effort to avoid this issue, many restaurants add an automatic gratuity to parties of six or more; often the gratuity is set at 18%. If you have a large party of six or more, verify that the gratuity is being added to the bill to avoid double tipping.

It is also customary to calculate tips prior to tax.

Certain ethnic groups and Millennials have been stereotyped to be less generous tippers than others. Restaurant owners have gotten hip to this no-or-stingy tipping routine, so many have added an 18% to 22% tipping amount onto a dining bill so that their waitstaff doesn’t get stiffed.

On the flip side, those over age 55, according to surveys, are the best tippers, oftentimes leaving a 20 percent gratuity.

So, how is a tip calculated?

What’s a quick way to determine a 20 percent tip for example?

Etiquette experts—Diane Gottsman, author of Modern Etiquette for a Better Life, and consultant Julia Esteve Boyd recommend which service providers to tip, and the amount:

Host or Maître d’–No obligation for greeting you and showing you to your table, $10 to $20 for finding you a table when it’s next to impossible

Tipping jars–No obligation; tip occasionally if your server provides a little something extra or if you’re a regular customer.

Coatroom attendant–$1 to $2 per coat

Restroom attendant–$1 to $2 depending upon the level of service

Hairdresser–15% to 20% (It is acceptable to tip the owner unless he or she states otherwise.)

Housekeeper–$3 to $5 per day, left daily with a note that says, “Housekeeping – Thank you.”

Hotel room service–10 to 20 percent if gratuity has not been included in the bill; no additional tip necessary for tray pickup

Concierge–No obligation for answering questions. $5 to $10 for theater/concert tickets or restaurant reservations; $20 plus for special services like hard to get tickets

Parking lot attendant who brings you your car–$1 to $2