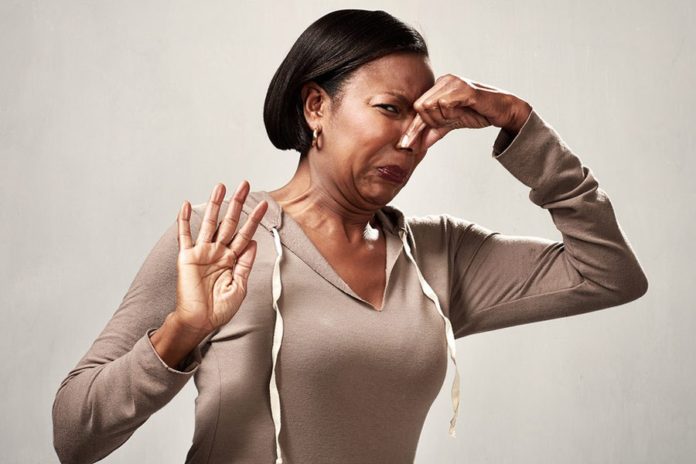 Cedric W., 63, admits he has a problem and it is driving his wife, Angela, 59, crazy! Cedric passes gas and has even made a game out of it particularly when they are lying in bed at night. Angela, however, used to find her husband’s flatulence funny but now, not so much. “On at least three days out of the week, I sleep in one of our guest bedrooms because my husband blows me out of our bedroom! He laughs when I get fed up and run out of the room,” says the New Jersey-based dental hygienist. “I love my husband, but enough is enough!”

Flatulence is a build up of gas in the digestive system that can make you feel uncomfortable if you don’t pass it. We all have it.   As we age, we get gassier! According to the National Institutes of Health, believe it or not, most people produce about 1 to 4 pints of gas a day and pass it, on average, about 10 to 18 times a day. Passing gas is normal and comes mostly from two sources—the air we swallow and as a byproduct of digestion.

Whenever we eat, drink or swallow saliva, we swallow air that accumulates in the gut. The buildup of internal gases that are formed during digestion and respiration is removed from the body via the anus. The release usually has a sound and odor but this passing of gas, breaking wind or farting can also be odorless and quiet. The gas or flatus is composed of five odorless gases– nitrogen, hydrogen, carbon dioxide, methane, and oxygen. The smell is primarily attributed to trace gases such as skatole, indole, and sulfur-containing compounds (the stinky mixture in eggs). Methane is also smelly in about one-third of people

Passing gas is good for you!

Farting is a normal bodily function because it is the release of internal gas. It is harmless and necessary for normal metabolic functions. Passing gas is an inconvenience, sometimes, and an annoyance to others if they have an odor. Releasing these gases are also a sign that your “gut bugs” are well fed, working smoothly and that your diet is on point. High fiber diets tend to cause gas but feed good bacteria that make up your immune system and protects you from such illnesses as cancer, heart disease, and diabetes.

And speaking of cancer and passing gas, there’s some early evidence suggesting that farts offer protection against diseases like cancer because of the specific gases they contain. Farts contain hydrogen sulfide, a gas produced by specific natural bodily processes and needed as part of cellular functions. Inhaling hydrogen sulfide (yes, from your very own farts, PLEASE don’t try doing this with someone else’s!) in small doses might help protect cells’ mitochondria and stop cellular damage at some level.

Do you have excessive gas?

Even up to 20-25 times is considered normal for passing gas; more than this is excessive. Some chronic conditions can contribute to excessive flatulence such as ulcerative colitis, gallstones, diverticulitis or even some types of cancer can lead to a blockage in the intestines. In addition, several other underlying causes can lead to passing gas more than what is considered normal:

Viral, bacterial, or parasitic infection of the digestive system or food poisoning

If you’re experiencing excessive gas, it is released involuntarily, continually smelling foul, or giving you have sharp cramps/pain in the abdomen, consult a gastroenterologist, a physician who primarily deals with digestive system disorders and who will delve further into the matter.

Foods that can cause flatulence

Foods with sorbitol (an artificial sweetener found in sugar-free foods)

Daily (if you are lactose intolerant)

What can you do to reduce flatulence?

If there is no serious underlying medical cause for your flatulence and you want to curb those farts somewhat by trying these tips:

Eat smaller meals: Rather than three large ones, try eating four to six mini ones

Eat slowly: Chew food thoroughly before it makes its way down digestively

Look for beans that are fermented before cooking: These types of beans contain less soluble fiber and more nutritional content

Try probiotics: Check out yogurts and drinks that are categorized as probiotics to reduce symptoms; cultured veggies like sauerkraut or kimchi are also proven helpful

If the tips mentioned are not helpful, some OTC meds can reduce flatulence. Charcoal tablets can absorb some of the gas in your gut but they might also interfere with some prescription meds, so check with your doctor before you try this remedy. Beano is another highly touted OTC product for gas issues and could be helpful particularly after consuming beans.