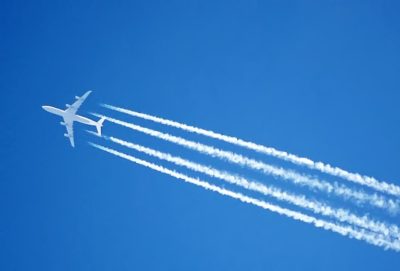 Look up in the sky. It’s a bird, it’s a plane, it’s Superman, no, wait, it’s chemtrails?  First of all, the subject of chemtrails is a very controversial one that has actually spawned a political movement. There are those who just slough off the debate surrounding chemtrails by explaining that the white cloud-like substances you see being expelled from airplanes are just the product of water vapor, carbon dioxide, and jet exhaust. On the flip side however, there are those folks like me, who take offense at being labeled a ‘conspiracy theorist.’ I, along with countless others, know that there is more than meets the eye when it comes to these streams of white that streak across the sky.

Ok, so we’ve known that planes form contrails, or long, reflective clouds, since the end of World War I. But in the late 1990s, many people became alarmed by what they believed were new kinds of contrails, dubbed chemtrails, which were being used to change the earth’s atmosphere. You’ve seen these white streams for eons and probably just never really gave them any real thought. Chemtrails are nanoparticles containing toxic chemicals like aluminum that are aerially sprayed in the atmosphere. If you pay attention to the sky you’ll see some of the cloud-like formations that look nothing like the Cumulus (puffy cotton-like), Stratus (huge gray blanket, hang low) and Cirrus (thin, wispy) clouds we learned about in grade school. These white formations look like long jet streams. They can take on a look that is similar to a tic-tac-toe grid or form rows of straight lines. And when minutes pass the man-made forms come together to configure into artificial clouds.

Jet streams never last more than a minute; chemtrails can last up to 20 hours. Iraja Siva-Das, a professor of mathematics at Shasta College in Redding, California, and member of the Union of Concerned Scientists has studied chemtrails and is a firm believer in their existence, he explains what is in the makeup of chemtrails and how they are impacting the earth, “There is a huge amount of aluminum found; these sprays contain aluminum, strontium, barium, and manganese. Aluminum is common in a bonded form not in a free form, and we are finding high rates of free-form aluminum in the soil which is not natural.”

Allan Buckmann has the ideal credentials for addressing the critical issue of climate engineering. Buckmann is a former military meteorologist and was a California Fish and Game biologist for 38 years. Buckmann, who has been deemed the ‘chemtrails whistleblower,’ firmly believes these white streaks are not your ordinary run-of-the-mill water vapors. “It is clear to me there is an intentional cloud creation program in operation daily across the USA and in a large part of the globe. Anyone who witnesses a jet trail turn into a cloud and hang in the sky for hours, and sometimes days, is a witness to a cloud creation program. You can call them anything you want, but they are documented fact and yet are being largely ignored. The cloud creation program is not a theory as ‘they’ say, but a fact. We even have several new clouds based on the spray program! These programs pose the most significant and dangerous environmental impacts in human history,” says Buckmann.

Chemtrails are still pretty much a mystery. It is not clear who/what is behind them–the military, NASA, CIA, multinational corporations. And then there is the remaining question…why do these chemtrails exist? Some theories surrounding chemtrails include depopulation and how in order to accomplish this goal, the powers-that-be are purposely making people sick and having them die prematurely. Another popular belief held by some is that by manipulating the weather, you can actually control the financial markets like derivatives, and agricultural and energy commodities. Others have reasoned that chemtrails are done to block out the sun’s rays and this results in global dimming, thereby reducing solar power and photosynthesis which seriously impacts our environment.

Well, I contacted the Environmental Protection Agency (EPA) and according to a spokesperson, the agency offered the following explanation for the puzzling white aerial streams. “Contrails are the line-shaped clouds or condensation trails, composed of ice particles that are visible behind jet aircraft engines under certain atmospheric conditions that at times can persist. The EPA is not aware of any deliberate actions to release chemical or biological agents into the atmosphere.”

Distinguished pilots, medical doctors, and scientists gathered a couple of years ago at the Shasta County California Board of Supervisors to discuss the issue of geoengineering/weather modification and the spraying of nanoparticles of various chemicals such as barium, strontium, and aluminum into the atmosphere. They voted unanimously to send the information obtained during this hearing to the EPA, the California Air Resources Board, and state and federal legislators. I’d gamble that perhaps their efforts fell on deaf ears.  Well, here are a few of the expert’s testimonies who attended the Shasta County meeting on chemtrails:

“I became interested in chemtrails when I was in Hawaii and Hawaiians were very vocal about it. When micronized aluminum is breathed in, it leaves a metallic taste in your mouth.”(Dr. Frank Livolsi, doctor and pilot)

“We’ve got things coming down from the sky. As it [aluminum] comes down, it’s in our air that we breathe into our nostrils, it goes into our brains, in the frontal lobe. The contaminant aluminum is the number one neuro-free radical in the brain to cause early Alzheimer’s.” (Dr. Steven Davis, D.C., C.T.N.)

“I’ve been practicing for 17 years and in the past five years I’ve seen a number of patients with Alzheimer’s disease, Parkinson’s, and other neuro-degenerative diseases tremendously increase, almost quadruple.” (Dr. Hamid Rabiee, neurologist)

Mark McCandlish, a former Defense Industry technician said that trees absorb the thermal nanoparticles of barium and aluminum through the root system and, when trees burn, they burn considerably hotter, increasing the cost and danger of putting out forest fires.

I believe none of us are spared from this deadly, heavy metal aerial pollutant that falls from the skies and land on our trees, vegetation, soil and ALL living things. These toxic particles can wreak havoc in our bodies, lodge in our lungs, get into our bloodstream, attach to our cell walls and eventually penetrate our brains. There is no escaping chemtrails as it affects all aspects of life and not just in the United States; these mysterious sky streams have been seen all over the planet.

Still think chemtrails are just a load of BS? Consider all of the countless unethical human experimentations conducted throughout American history by the government that were oftentimes performed illegally. Do your own research. There are plenty of documentaries on the Internet like What in the World are they Spraying and Hacking the Planet: The Climate Engineering Reality, to just name a few. Google, chemtrails. Better still, take a moment from your hectic life to look up at the sky. Eventually, you will see these chemtrails for yourself. And what’s really scary is that we have no place to hide.