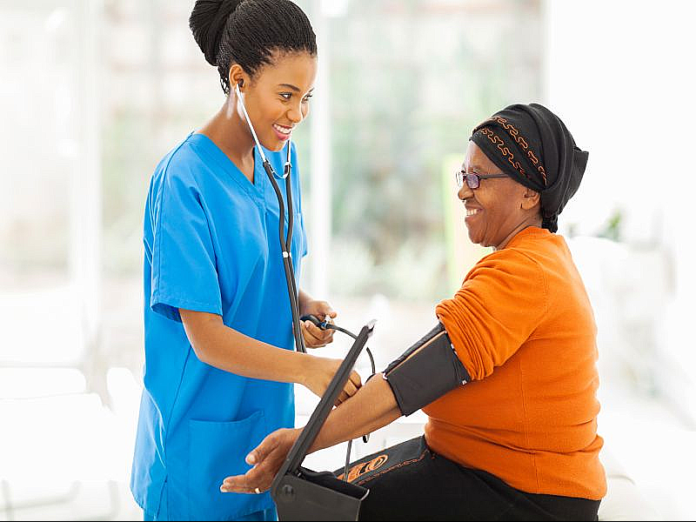 According to a study recently published in the Journal of the American Heart Association, African Americans are up to two times more likely to develop high blood pressure by age 55 compared to whites, with many of these racial differences developing before age 30. The take-home message, according to authors, is the importance of high blood pressure prevention in Blacks beginning at a young age.

It is never too late to keep hypertension at bay.

Researchers have concluded that there may be a gene that makes African-Americans much more salt sensitive. In people who have this gene, as little as one extra gram (half a teaspoon) of salt could raise blood pressure.

There are little changes we can make in our daily lives to keep blood pressure in the normal range.

Cut down on salt.  How many times have we heard of limiting our sodium intake!   Salt is not a bad thing, BUT it can cause a whole heap of worries for salt-sensitive folks. Sodium can introduce water into the bloodstream, which can increase the volume of blood and blood pressure. There are many foods, especially processed ones like snack foods (chips, crackers), deli meats, and soups (canned or powdered) that have loads of salt. Look for sodium on the Nutrition Facts label. Even ‘reduced sodium’ foods can still contain more sodium than you expect. Sodium is listed as milligrams per serving, and that may not mean the whole package. If you eat a whole can of chicken soup, you may actually be eating two or three servings, so make sure you account for all the sodium.

The American Heart Association recommends no more than 2,300 milligrams (mg) a day and moving toward an ideal limit of no more than 1,500 mg per day for most adults.

Bathe those canned foods.  Many folks still enjoy canned foods.  If you can’t give up the metal, then make sure to give the foods in them a thorough bath before heating. “Canned veggies do contain sodium, but rinsing them off before eating them can dial sodium back and for a more affordable alternative,” says Boston-based nutritionist Dana Greene, RD.

Go bananas. The yellow fruit is chockful of potassium, which is known to help lower blood pressure. The mineral helps balance the effects of salt on the body, and helps the kidneys function properly. One study, in particular, said just two bananas a day can reduce your blood pressure by 10 percent!

Knock off a few pounds. Losing even ten pounds can lower your blood pressure.  Being overweight is a risk factor for heart disease. If you need to lose weight, it’s important to do it at a slow pace; don’t try to rush it because you will fail!  Lose no more than 1/2 pound to 2 pounds a week. Begin with a goal of losing 10 percent of your current weight. This is the healthiest way to lose weight and offers the best chance of long-term success. One pound equals 3,500 calories. So, to lose 1 pound a week, you need to eat 500 calories a day less or burn 500 calories a day more than you usually do. It’s best to work out some combination of both eating less and exercising. It only takes a mere 30 minutes a day of activity to get your heart going and your blood pumping.

Eat more fiber.  High fiber foods like fruits and veggies are usually low in calories. Fiber also slows digestion, which helps to keep you feeling full. These foods digest much more slowly in the body because they stay in your stomach longer. Great sources include dried beans, peas, fruits (with the skin on), vegetables, and whole grains, according to the U.S. National Library of Medicine.

Drink coffee in moderation. Caffeine can cause a short, but dramatic increase in your blood pressure, even if you don’t have high blood pressure. The research is fuzzy as to what causes this spike in blood pressure. Some folks who regularly drink caffeinated beverages have a higher average blood pressure than do those who don’t indulge. If you suffer from hypertension, avoid caffeine right before activities that naturally increase your blood pressure, such as exercise. It might also be a good idea to speak to your doctor about cutting down or stopping your caffeine consumption.

Try meditation.  Meditation is a widespread practice that may be useful in preventing or reducing elevated blood pressure. However, a daily meditation practice requires discipline and allocating time each day. It could be as simple as sitting quietly and focusing on your breath. When your mind wanders (and it will!), gently bring it back to the breath again. Gradually increase the amount of time you’re able to stay focused. If you’re not sure how to get started, look for local classes on meditation, get recommendations from friends, or research different types that interest you.

Eat like the Greeks!  A Mediterranean diet has long been identified as a heart-healthy diet. Try to include a variety of these rich sources as part of your typical eating: veggies, fruits, lean meats, fish, whole grains, nuts (especially pistachios and almonds). And don’t forget to add olive oil to your veggies, research shows that adding olive oil to vegetables helps protect against hypertension.

Similar to the Mediterranean diet, the DASH (Dietary Approaches to Stop Hypertension) eating plan has been proven to lower blood pressure in just 14 days, even without lowering sodium intake. The diet is simple: Eat more fruits, vegetables, and low-fat dairy foods. Cut back on foods that are high in saturated fat, cholesterol, and trans fats.

According to studies, the best response to the DASH diet came from people whose blood pressure was only moderately high, including those with prehypertension. For people with more severe hypertension, who may not be able to eliminate medication, the DASH diet can help improve response to medication, and help lower blood pressure. The DASH diet can help lower cholesterol, and with weight loss and exercise, can reduce insulin resistance and reduce the risk of developing diabetes.

Eat yogurt. Over the years, yogurt has been shown to have many important health benefits, and now it can also aid in lowering blood pressure. Women who consumed five or more servings of yogurt a week had a 20 percent lower risk of developing high blood pressure than women who hardly ever ate yogurt, according to research presented at the American Heart Association’s Epidemiology/Lifestyle 2016 Scientific Sessions.

Cut down on the cell phone chatter.  Technology can make you sick, and talking too much on a mobile phone has been shown to increase blood pressure, according to a study at Italy’s Guglielmo da Saliceto Hospital. It turns out that blood pressure readings of men and women who had mild to moderate high blood pressure jumped to 129/82 from 121/77 while they chatted on their cells.

Drinking beet juice is where it’s at!  One study showed that guzzling one glass of beet juice lowered systolic blood pressure (the number on top) by an average of 4-5 points. There are nitrates in beets, which are converted into nitric oxide. The nitric oxide relaxes and dilates blood vessels to improve blood flow and lower pressure.

Stop smoking weed! Smoking marijuana—legal or not—may increase your risk of dying from high blood pressure, according to a study out of Georgia State University in Atlanta that appears in the European Journal of Preventive Cardiology. The study found that the risk of dying from hypertension grew with each year of smoking marijuana. “Marijuana stimulates the sympathetic nervous system, leading to increases in heart rate, blood pressure, and oxygen demand,” Barbara Yankey, who co-led the research told Newsmax.